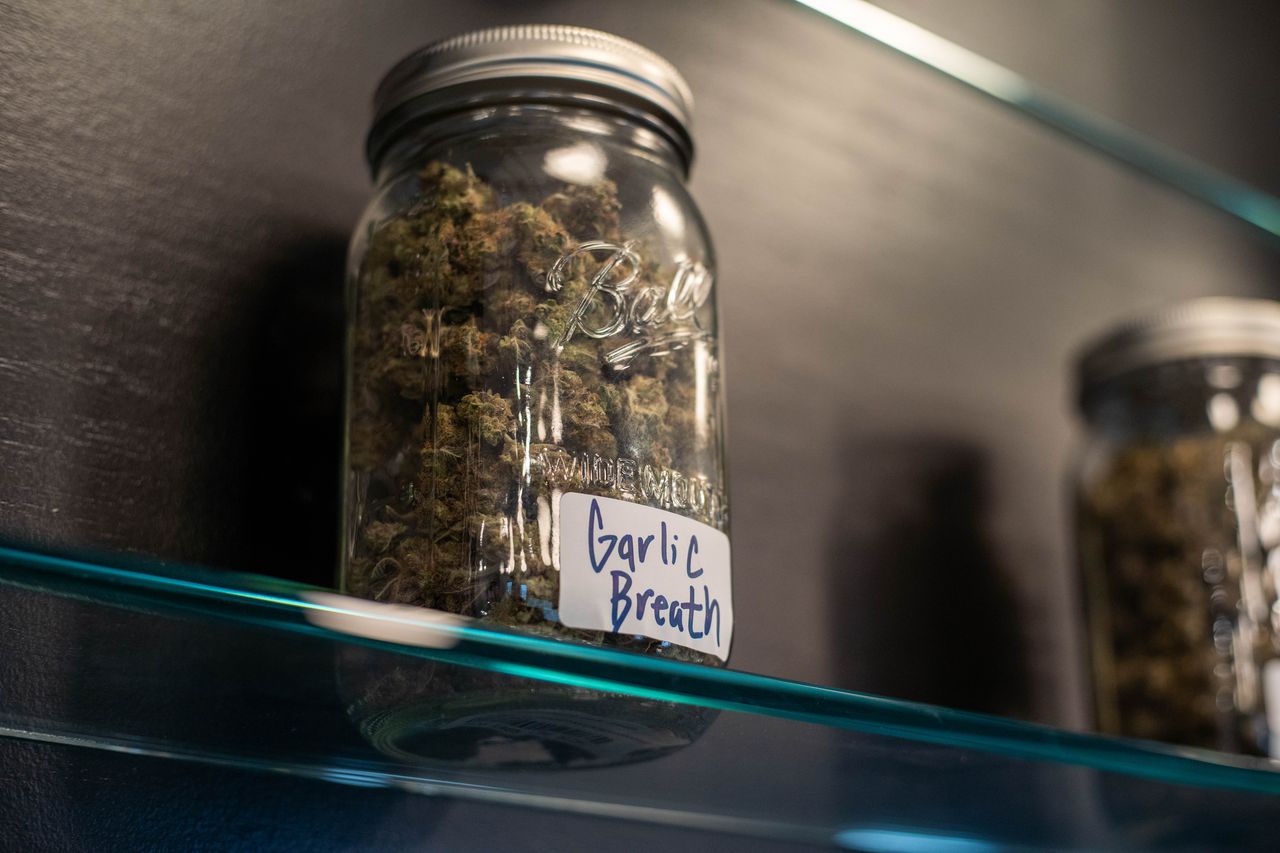 It changed perceptions of the long-illegal cannabis plant and helped set the course for Michigan’s eventual full marijuana legalization in 2018.

Marijuana, many learned between 2008 and 2018, was no longer just for “stoners.” It’s now generally accepted by most states that marijuana has medicinal uses. THC, the high-inducing compound in marijuana, may decrease pain, increase appetite and reduce nausea, according to the National Institute of Health.

Despite its pioneering origins, the long-term future of Michigan’s licensed medical marijuana market seems dim. It’s a market with a shrinking customer base that’s kept artificially afloat, in part, because of state laws and rules that ensure it doesn’t vanish, at least quite yet.

The state Marijuana Regulatory Agency is amid a balancing act as it attempts to grow the licensed commercial adult-use (recreational) market while ensuring medical patients aren’t left by the wayside.

Marijuana Regulatory Agency Director Andrew Brisbo says while the marketplace is changing, his agency’s focus is to “ensure that patients still have access to products they use for medicinal purposes.”

Brisbo said it was “kind of a surprise” that monthly recreational market sales exceeded medical sales so soon.

Despite the existence of nearly twice as many medical dispensaries in the state — 274 versus 148 recreational stores — recreational retailers sold $57.4 million in July, nudging past the $52.1 million in medical sales.

Based on state data, the number of registered medical marijuana patients has declined 10% from 276,353 in October to 246,577 in July. There are over three million more Michigan residents 21 and older who qualify to buy recreational marijuana.

As the number of registered medical marijuana patients declines, Brisbo said that doesn’t reflect less medical use, but more likely that medical market buyers are shifting to the new adult-use market and not renewing their patient registrations.

“I think overall growth of the markets enhances availability and access for patients,” he said. “Patients still have access through adult-use facilities … It’s really just about, are they specifically designated for medical or adult use.

“We have to be mindful of the fact that patients in Michigan didn’t disappear over the last year and a half, they just chose to access the market through the adult-use side of things.”

Perks for registered medical patients include: no 6% sales or 10% excise tax on products; typically a greater selection, since there are fewer customers competing for the same products; more stringent product testing; and access to higher potency edibles and tinctures.

But the outlook for medical marijuana, especially considering what has happened in states with more mature industries, isn’t promising.

Currently, any Michigan business that obtains a recreational license must first hold a medical license. Based on the 2018-passed law, the state Marijuana Regulatory Agency is permitted do away with the medical license prerequisite as soon as November, and Brisbo said that the agency is “leaning” that direction.

If it chooses not to eliminate the medical license prerequisite, the requirement automatically expires in December 2021.

The medical market is also expected to take supply blow when a new rule banning the purchase of caregiver marijuana takes effect on Oct. 1.

“I think it’s an important step forward,” Brisbo said. “It’s important the regulated market stand on its own two feet.”

Over the first six months of the licensed medical marijuana market’s existence, nearly 93 percent of all flower sales originated from caregiver product. As of last December, that figure had decreased to about 63%, according to the Marijuana Regulatory Agency.

Brisbo noted a huge increase in the number of marijuana plants grown by licensed businesses, a figure that increased from 130,000 in May to 340,000 by Aug. 1 as licensees prepare for the caregiver supply line to be shut off.

Considering how lucrative recreational sales are and the extra cost of carrying a dual medical license, currently up to $17,500 for initial licensing and not including annual renewals, there are likely to be many more recreational licenses than medical in the future.

“We do already start to see businesses that have multiple licenses asking questions about not renewing those medical licenses in the long term and focusing their energy on adult-use licenses,” Brisbo said.

The reason so many medical marijuana licenses exist today is businesses don’t have a choice.

Several retailers MLive spoke with said recreational sales make up the vast majority of their business, citing medical sales that make up as low as 15% of transactions.

Some worry that the shifting market could pit medical marijuana consumers who use products medicinally against recreational users, thereby increasing scarcity and inflating prices.

California became the first state in the U.S. to legalize marijuana for medical use in 1996, more than a decade before Michigan. It resulted in a nonprofit medical dispensary system and involved state registration of medical users, similar to Michigan.

In 2016, California voters passed the Adult Use of Marijuana Act, which decriminalized recreational possession and allowed communities to regulate commercial marijuana business.

The 2016 law, also known as “prop 64,” didn’t allow recreational stores to open until 2018. When that happened, it entirely changed the face of California’s medical marijuana market, said Luna Stower, CEO of Luna Stower Consulting LLC, which operates in California. .

Stower said “most medical brands went under” once recreational stores began opening, high-potency marijuana products often used for medical treatment are now banned and prices have shot up 75% to 100%.

Unlike Michigan, California doesn’t have dual medical and recreational markets.

“There is no true medical market in California, there’s no special line you can enter to speak to a pharmacist, like a budtender trained for medical care,” Stower said. “There’s no guarantee that the budtender or manager knows about, purchases, (or) can sell or dose medical products for wellness or medical efficacy.

“It is a joke of a system that uses the term ‘medical,’ but doesn’t support it medically in any way.”

Some Michigan industry insiders want to avoid creating a California-like market that shuns medical patients for expediency and profits.

Rick Paniagua, owner of Cannavista Wellness in Berrien County’s Buchanan, said it’s the medicinal side of marijuana that drew him into the industry in the first place and it should stick around. Cannavista Wellness obtained a medical provisioning license in February and a recreational retail license this summer.

“There’s value and benefits for having the medical license for now,” he said. “When (the requirement) changes, then maybe not.”

Paniagua agrees there should be a separate and distinct medical market for the time being.

He said the segregated market is what allows medical marijuana to remain on shelves for patients while it’s sold out for recreational use. He used THC vaping cartridges as an example a product that is available for medical customers but nearly always sold our for recreational sales.

“You need to maintain that medical market until the supply meets the demand.”

“That’s years down the road,” he said. “ … Right now the medical market is properly supplied, as best I can tell.

“For the most part, I can get most products when I need to get them. If you start to divert some of that production, that’s going to change.”

Paniagua’s staff includes a chief science officer and other medically trained personnel. He said some stores are only paying lip service to the needs of medical patients.

“We get those (medical) customers in here saying they’ll never go back there because they’re just tossing us aside,” he said. “Those people need a little more help. It’s just like a doctor-patient adjusting somebody’s meds.”

Paniagua said he’d renew his medical provisioning license, even if it wasn’t required by the state.

“This is our mission,” Paniagua said. “It’s not about how many people we put through the place, how much our sales are. It’s really about helping people.

“And we know that if we help people, in the long run, our business is going to be fine.”

More marijuana options could be coming to Michigan this fall

Marijuana thrives in market changed by the coronavirus

Spouses of licensees may be able to work for government

A prior marijuana conviction could be a good thing