Pizza, beer and cannabis, to some people, are a match made in heaven. In Worcester, they’re helping grow the North Worcester area into a “destination” neighborhood within the city.

And one of its newest investors, Alex Mazin, is hoping to help with his cannabis dispensary, Bud’s Goods & Provisions, which is set to open in September.

While searching for a location to open his dispensary, Mazin traversed the various neighborhoods of Worcester before settling on 64 West Boylston Street. The location offered him the two things he wanted most: lots of parking and a community presence.

“When I found that location and it happened to be zoned correctly, I knew that if I could get this location, that it would really help drive the goal, which, is to normalize cannabis into society,” he said.

Cannabis dispensaries are still a novel business venture in Massachusetts and are subject to strict zoning laws that limit their available operating locations. As a result, many dispensaries are opened in more industrialized locations that are not public-facing or easily located. His will be the exact opposite, he says.

On West Boylston Street, Bud’s Goods & Provisions will be perfectly visible to the public and have 37 parking spots available for customers across the street, thanks to an abandoned lot Mazin acquired.

“Instead of tucking it away behind an industrial park, or in a field that no one knows how to get to, by getting a location that’s right on a commercial corridor where 12,000 cars pass on a daily basis, that seemed like the golden ticket or the grand slam.”

Thanks to the area’s strong traffic flow, Mazin believes his business will be able to build a strong foundation of returning customers and even attract new cannabis consumers. Worcester is the perfect market to do so, he says.

“Worcester County is sort of like the epicenter of cannabis right now,” said Mazin. “And I think if the city of Worcester were to really continue to own it, what a cool thing to have to build an economy and to address so many social injustices at the same time … Because cannabis has so much to offer. And I think people are open to it, and they’re starting to do their own research about it and the curiosity is there.”

Mazin’s new enterprise is just one of many popping up in the North Worcester section, which is made up of the Greendale, Burncoat, Indian Hill, Indian Lake, North Lincoln and The Summit neighborhoods. The area has offered a hodgepodge of commercial and retail business in the city dating back to 1885 when the Norton Company first purchased property in the Greendale neighborhood.

A lot has changed since then. 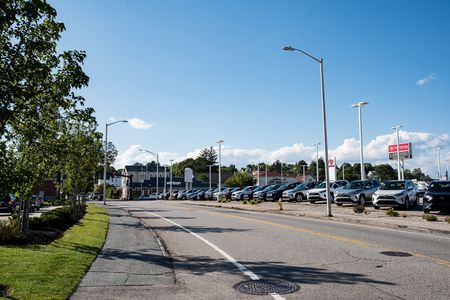 Today, a drive down Gold Star Boulevard will showcase the area’s wide array of businesses — a slew of car dealerships, a Chick-fil-A and a Home Depot anchor the busy commercial corridor

A very different kind of renaissance

Today, a drive down Gold Star Boulevard will showcase the area’s wide array of businesses — a slew of car dealerships, a Chick-fil-A and a Home Depot anchor the busy commercial corridor, which is, more or less, dominated by corporate companies. If you want to find the businesses that truly reflect Worcester, you’ll find family-owned restaurants like Lou Roc’s dotted all along the long, winding West Boylston Street. Ralph’s Rock Diner on Grove Street offers some of the cheapest drinks and loudest bands in the city. The strongest brews and hardest punches come from Greater Good Imperial Brewing Co. and Camp Get Right Boxing Gym, respectively, on Millbrook Street.

A downside for the city of Worcester is that most of it relies on a car to navigate, and North Worcester is no exception. Three and four-lane one-way streets dominate the area and offer very little foot traffic friendly travel.

This is in contrast to the business development taking place in Worcester’s downtown and Canal District neighborhoods, where an effort to create a “walkable” 18-hour-day is underway. Entertainment is key in those neighborhoods and, traditionally, North Worcester hasn’t been known as an entertainment hub in Worcester, but that’s changing.

That being said, as the downtown and Canal Districts become more “walkable,” the parking situations in both of those neighborhoods becomes increasingly bleak. A visit to the Canal District on any given weekend will turn even the most mild-tempered person you know, into a horn-honking road raged maniac.

So, you could argue the lack of walkability North Worcester has is a fair trade-off for its surplus of parking and its easy access to I-190, which is a major attraction for businesses in the North Worcester area, says Worcester City Manager Edward M. Augustus.

“We’ve seen tremendous growth in the retail corridor along Grove Street and Gold Star Boulevard,” said Augustus. “An important factor for site selectors, especially for national retailers, is traffic count, which is very strong along that corridor.”

It’s no surprise then that North Worcester is home to some of the city’s longest-lasting businesses — Tortorelli & Son’s Worcester Sound & Light, Strand’s Ski Shop, Gold Star Restaurant, just to name a few.

For businesses, unfortunately, a longstanding history does not make one immune to unexpected turmoils. Recently, the coronavirus pandemic has wreaked havoc on small businesses across the country. Worcester has not been immune to the virus’ widespread destruction, including the permanent closing of locally owned businesses. 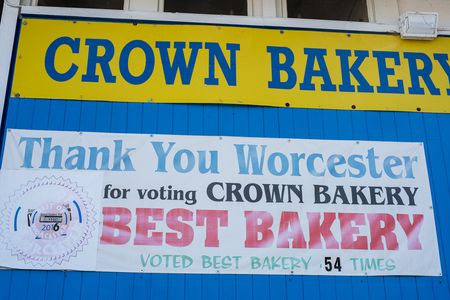 Crown Bakery & Cafe served Worcester Swedish baked goods on Gold Star Boulevard for more than 50 years up until March, when the owners announced the bakery would close until further notice due to the coronavirus outbreak. Three months later in June, a sign on the door announced the closing was permanent.

The baked goods from Crown Bakery will live on, however, as their original recipes will be served at The Bean Counter, which recently opened a second location on Grove Street in Worcester.

But even without a pandemic, a business’ success is finite.

Not too long ago the Greendale Mall was a thriving shopping destination in North Worcester, but years of declining customer attraction forced businesses out, leaving a limited number of remaining stores including TJ Maxx/Home Goods, Greendale Furniture, DSW, Bath and Body Works and only a handful of others.

The future of the mall remains unknown.

Finard Properties, a real estate development and management company based in Boston, purchased the mall in December of 2019 for $7.125 million and has announced plans to turn the mall into a “mixed-use destination.”

As it sits now, the mall is sort of an asterisk to an otherwise flourishing economic situation in North Worcester.

“That growth we’ve seen with the retail is an interesting juxtaposition in the face of a struggling Greendale Mall,” said Augustus. “We’re very excited to be working with Finard Properties, who acquired the mall in 2019 and are looking forward to the future of that site. That amount of contiguous acreage in our city is scarce and creates an opportunity to reimagine that site into a productive reuse that will breathe new vitality into that whole area.”

Even with the mall’s stagnancy, North Worcester’s economic growth continues to draw in corporate and local businesses. 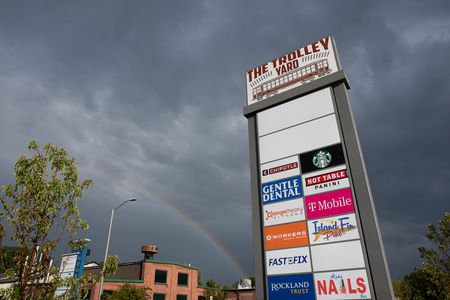 A new plaza known as the “Trolley Yard” opened at 305 Grove St. and brought in a Starbucks, Chipotle, T-Mobile, Orange Theory and more.

A new plaza known as the “Trolley Yard” opened at 305 Grove St. and brought in a Starbucks, Chipotle, T-Mobile, Orange Theory and more.

Wengender says he looked at dozens of properties before settling on 55 Millbrook St., which, ironically, was the first property he viewed in his search for a location that would offer both ample brewing and taproom space.

The brewery is a community hub for college students, public servants, teachers and other local industries, thanks to its large taproom, says Wengender.

“When we thought about where to find our spot, we looked at a lot of things from a building and infrastructure standpoint,” said Wengender. “I look at this place we’re standing in standing here, looking at the empty taproom, and I thought about, well, OK, ceiling height matters, loading dock matters, water matters, plumbing, drainage, electrical, HVAC and then parking lot matters.”

All of that in mind, Wengender wasn’t sold on the location, but after touring various locations, it clicked.

“We ended up sort of fine-tuning the way we thought about how we wanted to reach the community,” he said. “And at the same time, have manufacturing in the building. I said, ‘You know what, we have parking, we can adapt our systems to the height,’ because it’s sort of a somewhat lower ceiling for a brewery that wants to manufacture. But, we found an operation in North Carolina that would customize our brewery to fit the ceiling. And then we struck a deal with the landlord and we’re off and running.”

And as Greater Good once was the first brewery to invest in the area, other industries, such as cannabis, now have the chance to be a first in the area.

“All the new industries and people from the outside that are investing in the area make it a really cool radiating situation for economic growth”, said Wengender. 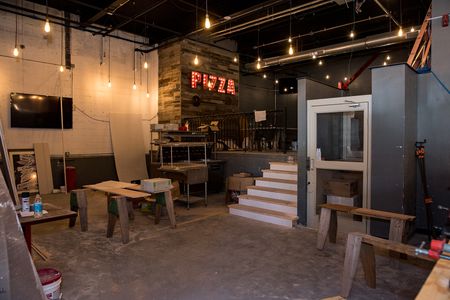 ’Olo Pizza will offer a full bar and game room at 40 Milbrook Street.

Across the street from Greater Good, Peter Rano, co-owner of ’Olo Pizza, is getting ready to open his new restaurant at 40 Millbrook St., formerly the home of Dacosta’s Pizza Bakery.

The new restaurant is on track to be open by the end of the summer, he says.

The property, which is just over 6,000 square feet, will offer a full bar and game room, which will help distinguish itself from other pizza restaurants in the city, says Rano.

“We looked around, and over here on Millbrook Street, I enjoyed the location, said Rano. “And I thought it had even more potential than what it was. And, I’m confident. With the parking and our friends at Greater Good across the street and just the traffic. And being over here during construction, you realize how much traffic actually comes by you. For a ‘side street,’ it’s pretty significant.”

Rano envisions businesses such as his, Greater Good and Bud’s Goods & Provisions all benefitting one another.

“I think that’s how it goes in any of these neighborhood revival situations,” said Rano. “Everybody kind of feeds off each other and that’s what we’re hoping will happen here.”

The businesses, Wengender says, are complimentary.

“The rising tide raises all boats,” he says.