Some of Canada’s biggest cannabis companies are facing a $500 million lawsuit stemming from a supply dispute between a group of shareholders backing a Leamington, Ont. greenhouse. The lawsuit alleges that Canopy Growth, the firm’s venture arm Canopy Rivers, as well as TerrAscend. and its Canadian subsidiary committed a series of actions including „bad faith, fraud and civil conspiracy” after refusing to accept cannabis grown at the PharmHouse facility, claiming the rates it once agreed to pay were no longer „commercially reasonable.” The facility, which the plaintiffs claim cost $114 million to build, was initially licensed in July 2019 and completed in February 2020. Canopy Rivers said the lawsuit is „completely without merit,” a statement echoed by a TerrAscend spokesperson, while a Canopy Growth spokesperson declined to comment.

Canadian cannabis retailer Fire & Flower Holdings said it lost $29.1 million in its second quarter despite sales more than doubling from the same period last year. Fire & Flower, which owns and operates at least 51 legal pot shops across Canada, said it made $28.6 million in revenue in the three-month period ending Aug. 1, an increase of 158 per cent from last year. The retailer said it saw „basket sizes” increasing during the onset of the COVID-19 pandemic as consumers purchased larger volumes of product, but added purchasing behaviour appears to be returning back to normal. Stifel analyst Justin Keywood said in a note that he expects the retailer to begin consolidating other retail operators as „organic store licence wins have been slow to materialize.”

Hexo said late Monday it hired Trent MacDonald as its new chief financial officer, the fourth such appointee to the role in a year. The Ottawa-based cannabis producer said MacDonald will succeed Stephen Burwash, who will continue in the role until the new hire receives his security clearance from Health Canada. MacDonald previously worked at Rx Drug Mart in a CFO role and also held various finance-related executive positions at Indigo and Sobeys. Jefferies analyst Owen Bennett said in a note on Tuesday that he views the appointment as a negative given MacDonald’s lack of experience with any global consumer goods organizations. „This does not really inspire confidence as an observer with regards to the outlook for the company,” Bennett said.

Ontario to open cannabis distribution centre next month in Guelph

Ontario will open its second cannabis distribution warehouse next month, according to Guelph Today. The news website said that the Ontario Cannabis Store, which also manages the wholesale distribution of cannabis in the province, plans to hire more than 100 people at the new facility in Guelph. The new warehouse will help support the growth of hundreds of new licensed pot shops across the province, adding a second distribution option to the existing, smaller facility in Oakville. Once the new distribution centre comes online, the provincial cannabis retail regulator said it will double the amount of pot store licences it issues to 40 a month. 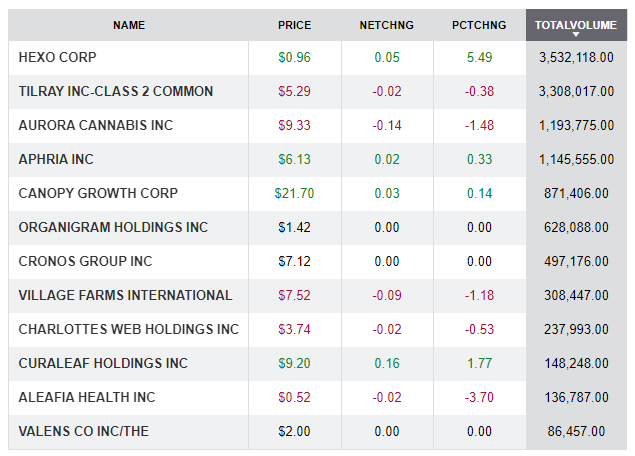