More than $231 million worth of cannabis was sold in Canada in July, up 15.2 per cent from the prior month, according to Statistics Canada on Friday. The monthly increase is the biggest gain since cannabis was legalized in Canada in Oct. 2018, while the July figure represents an annualized run rate of $2.78 billion. All 10 provinces and all three territories reported a monthly sales gain in July for the second straight month, the StatsCan data showed. Ontario led the country with $60.3 million in cannabis sales in July, up 23.5 per cent from June, while Alberta and Quebec were not far behind with $51.8 milion and $43.9 million sold, respectively. On a daily purchase rate, sales were up 11.5 per cent in July from the prior month. Stifel analyst Andrew Carter said the sales data showed that Canada’s cannabis market should grow to $2.5 billion in sales in 2020, up 113 per cent from 2019.

The Canadian Chamber of Commerce is hoping the Liberal government embraces further pro-cannabis positions when it makes its throne speech next week. The organization’s National Cannabis Working Group is calling for the government to help accelerate the conversion from the illegal market to the regulated one to help spur job growth in the midst of the COVID-19 pandemic, as well as addressing regulatory barriers to growth and establishing a national excise stamp for cannabis products to help reduce administrative costs for the industry. As well, the group is advocating for Global Affairs Canada to establish a robust medical cannabis export and promotion strategy to take advantage of the billion-dollar global market that Canada has yet to make its presence known in. “As the government looks to support Canada’s economic recovery there is a ton of untapped economic potential in Canada’s cannabis industry,” said Nathan Mison, the group’s co-chair said in a statement.

Wildfires in Oregon are threatening to destroy one of the U.S.’s most productive hemp growing regions, according to Hemp Benchmarks. The industry analysis firm said more than one-third of Oregon’s hemp cultivation lies in regions that are experiencing major wildfires, with 17 per cent of the state’s grow sites facing imminent danger from wildfires. Oregon has the fourth most acreage registered for hemp growing of any state, after Colorado, Arizona, and New York. The fires may also cause testing and supply chain interruptions as the wildfires rage on with at least two testing labs in the area lost to the blazes, the firm said.

Martha Stewart certainly enjoys the new line of CBD gummies that she co-launched with Canopy Growth. In a feature published by the New York Times, the 79-year-old „goddess of domesticity”, said she consumes as much as 20 of the cannabis-infused pâte de fruit edibles, which helps her feel relaxed. The newspaper describes her partnership with Canopy as Stewart keeping up with the times as an early adopter of fast-moving trends. Canopy’s CEO David Klein said Stewart’s partnership with the company will help „build that authentic connection with the consumer base” to help bring an older demographic that may not be comfortable with cannabis to be okay with it.

$6.13
– The price of a gram of cannabis in Canada, down 3.8 per cent from the prior week, according to the Cannabis Benchmark’s Canada Cannabis Spot Index​​​​​​​​​. This equates to US$2,112 per pound at current exchange rates. 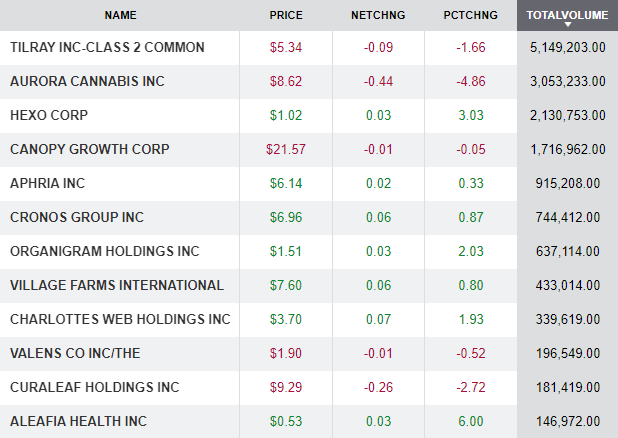