Last month, Canadian firm Hyasynth received a $2.5 milllion milestone payment for its commercialization achievements in being first-to-market with cannabidiol (CBD) produced and extracted from a biomanufacturing setup.

“It’s a typical yeast fermentation, so the equipment involved would be similar to the production of insulin,” Kevin Chen, CEO of Hyasynth told this publication. “We grow the yeast in a bioreactor. We do grow on typical yeast media with no special precursors for our pathway. For purification there are a series of steps involved, with some important distinction since we’re handling a small molecule here and not a protein.” 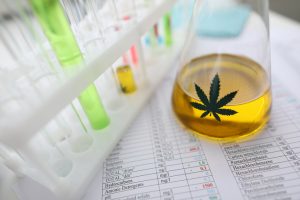 While the methodology is similar, production is cheaper than biological drugs as “protein biologics usually have to be handled in very specific ways that make the manufacturing complex and expensive,” he added.

“We’re producing a small molecule here rather than a protein, so the way that we can improve and optimize for high yields is different there as well. The purification steps are also substantially different. In this case, we can use solvents and extraction conditions that would normally break down protein biologics.”

Like (prescripton) drugmaking, the reproducibility of the process allows standardized product, Chen told us.

“One of the beautiful things about this production method is that it is a specialized technology that works with traditional, high quality manufacturing that can be found anywhere in the world. Instead of trying to reinvent the wheel by making a Cannabis plant that grows in strict conditions for quality and chemical profile, our novel technology works with the existing manufacturing practices.

When you look at the burgeoning CBD and cannabinoid market, pictures of fields or greenhouses full of plants come to mind. Making such products using fermentation eliminates the need for such cultivation, and though Chen noted cannabis agriculture may still have a place for the production of other food and material products “for the production of CBD, THC or any other cannabinoid, fermentation will ultimately be more efficient and deliver on the scale and quality needs of brands and pharmaceutical companies.”

Hyasynth is not alone in using bioprocess techniques to make cannabinoids. Last year, Cronos Group bought an 84,000 square-foot biomanufacturing factory in Winnipeg, Canada to produce cannabinoids. Meanwhile, Pluristem Therapeutics is looking to use its cell culture platform for the growing of cannabinoid-producing cells as an alternative to the cultivating of cannabis plants.

However, Chen said “we’re the oldest company in this space, and we’re the only ones that have produced CBD in this way while also having a portfolio of rare cannabinoids as well. Other companies have focused solely on rare cannabinoids like CBG [cannabigerol]. Our portfolio includes yeast strains that produce CBD, THC, CBG, THCV, CBDV and even a few new molecular entities that we’ll be looking into as well.”