You’re reading a copy of this week’s edition of the New Cannabis Ventures weekly newsletter, which we have been publishing since October 2015. The newsletter includes unique insight to help our readers stay ahead of the curve as well as links to the week’s most important news.

Several weeks ago, we explained why the Canadian LPs could get a lift from the U.S. elections, suggesting that financial media are misleading their audiences by including Canadian companies in their stories inappropriately. We also explained how the largest ETFs include primarily Canadian LPs and that investors don’t seem to understand the bet they are placing. Finally, we projected that any move towards legalization would be perceived as a potential benefit to the large LPs, who might finally be able to enter the U.S.

In the three weeks since our post, the New Cannabis Ventures Canadian Cannabis LP Tier 1 Index has soared nearly 25%: 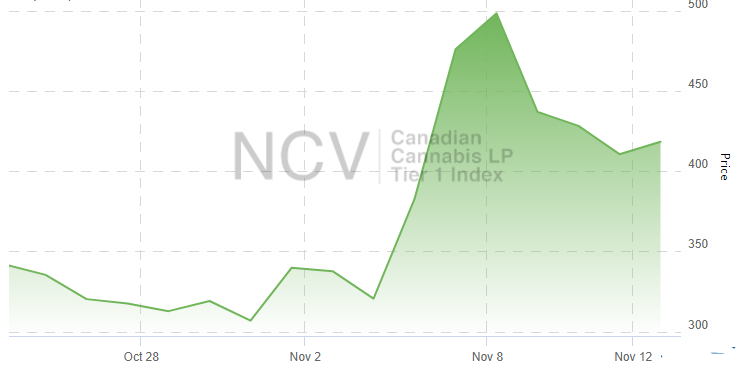 A look at the four largest Canadian LPs and the four largest MSOs by market cap shows that American cannabis companies are benefiting less from the election wins than the LPs, with only GTI, which posted a monster of a quarter last week, able to beat any of the Canadian LPs: 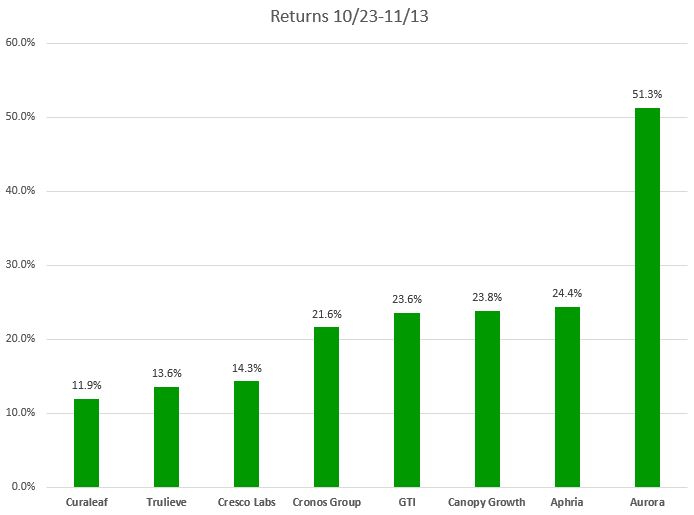 Volumes for the Canadian LPs have been off-the-charts. In fact, ahead of last week’s equity offering from Aurora Cannabis, the stock traded 460 million shares just in the U.S. on November 16th, which is way more than the number of shares outstanding and represented a stunning $4.7 billion in traded value. Canopy Growth’s traded value that day in the U.S. was $806 million as it traded 4X its normal volume. The volumes for these stocks have remained quite high.

We think investors who are betting that the U.S. market will soon open up to Canadian LPs are making a big mistake. First, it’s not a foregone conclusion that the Democrats will win control of the Senate in January when Georgia conducts its run-off elections, but, even if they do, this is an extremely complex process. We remind our readers that Canada, where medical cannabis was already legal, took a full three years from the time Trudeau was elected in 2015 to launch adult-use sales. It’s been over two years since CBD was thought to be legalized in the U.S., and we still haven’t figured that out! There are many issues that would slow any potential move towards legalization in the U.S., especially interstate commerce.

Even if we are wrong about the timeline to legalization, we think that any door that would open to a large Canadian LP would also open to many other companies. The results thus far in terms of growth and profitability for the largest Canadian LPs have greatly lagged their American peers, and we remind our readers that most of them have no retail experience due to limitations by the various provinces. We think that CPG companies and retail companies, all with substantially more resources than the large Canadian LPs, would walk through that theoretical door opening and partner with leading American operators or just buy them. Let’s not forget, as well, that the American operators, who have already proven that they know how to satisfy their consumers and earn a profit at the same time, would have greatly enhanced access to capital.

It seems clear that the sudden surge in interest and prices for Canadian LPs is due to the American elections, as we expected. For those making the bet that these companies will actually benefit, we think that any potential payoff is a long way out.

This week’s Sunday newsletter is brought to you by Pall.
Filtration Solutions for Cannabis Oil Processing 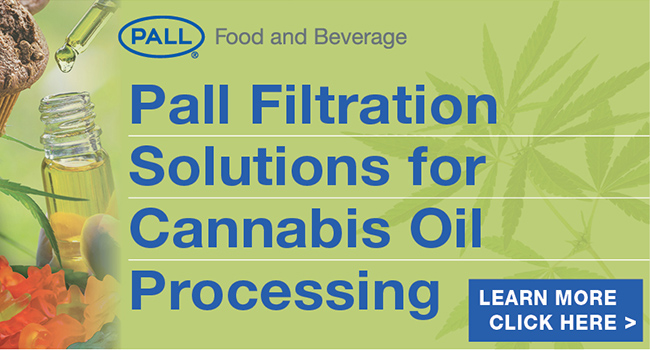 In this new and increasingly crowded market, having the right products for applications will ensure manufacturers remain competitive. With solutions for clarification, color removal and pathogen detection, Pall can offer a range of solutions to guarantee a better quality product.

New Cannabis Ventures publishes curated articles as well as exclusive news. Here is some of the most interesting business content from this week:

Get ahead of the crowd! If you are a cannabis investor and find value in our Sunday newsletters, subscribe to 420 Investor, Alan’s comprehensive stock due diligence platform since 2013. Gain immediate access to real-time and in-depth information and market intelligence about the publicly traded cannabis sector, including daily videos, weekly chats, model portfolios, a community forum and much more.

Use the suite of professionally managed NCV Cannabis Stock Indices to monitor the performance of publicly-traded cannabis companies within the day or over longer time-frames. In addition to the comprehensive Global Cannabis Stock Index, we offer a family of indices to track Canadian licensed producers as well as the American Cannabis Operator Index.

Stay on top of some of the most important communications from public companies by viewing upcoming cannabis investor earnings conference calls.

Based in Houston, Alan leverages his experience as founder of online communities 420 Investor, the first and still largest due diligence platform focused on the publicly-traded stocks in the cannabis industry. With his extensive network in the cannabis community, Alan continues to find new ways to connect the industry and facilitate its sustainable growth. At New Cannabis Ventures, he is responsible for content development and strategic alliances. Before shifting his focus to the cannabis industry in early 2013, Alan, who began his career on Wall Street in 1986, worked as an independent research analyst following over two decades in research and portfolio management. A prolific writer, with over 650 articles published since 2007 at Seeking Alpha, where he has 70,000 followers, Alan is a frequent speaker at industry conferences and a frequent source to the media, including the NY Times, the Wall Street Journal, Fox Business, and Bloomberg TV. Contact Alan: Twitter | Facebook | LinkedIn | Email