A consistent failure to achieve profitability has led most investors to ditch the stock of Canadian pot producer Aurora Cannabis (NYSE:ACB) in 2020. Year to date, the stock is down over 68%. The benchmark Horizons Marijuana Life Sciences ETF is down just 15% in that time.

The company’s second-quarter 2021 earnings release arguably contained several negative developments that disappointed investors. But I think Aurora’s future a year from now could be brighter than today’s financials may suggest. Let’s look at why taking a small stake in Aurora now could pay off in the medium term. 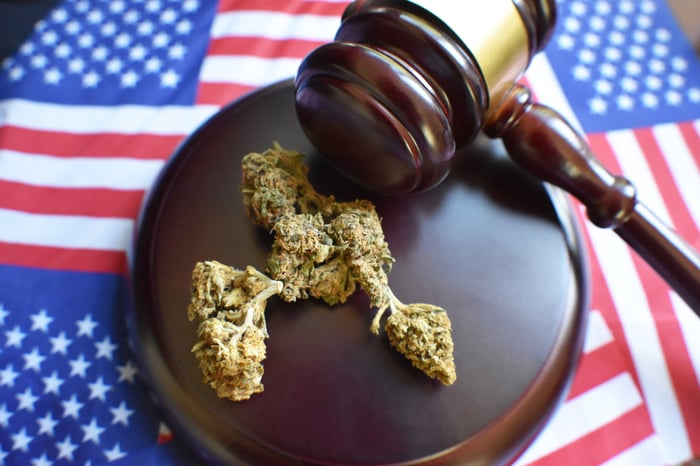 During the first quarter of 2021, Aurora’s net revenue decreased to $67.8 million Canadian dollars from CA$75.2 million in Q1 2020. The company managed to sell 16,139 kilograms of cannabis during the quarter, an increase from the 12,463 kg it sold in Q1 2020. Unfortunately, Aurora was not able to profit from this increase — over the past year, the price of dried cannabis sold by the Canadian producer fell sharply from CA$5.68 per gram to CA$3.70 per gram because of excessive supply from sector players.

Citing lackluster demand from consumers, the company has recently had to close down cultivation facilities it invested in and write down the value of cannabis subsidiaries it had acquired, resulting in huge losses. In Q1 2021, the company had over CA$5.6 billion in total assets. One year later, Aurora’s total assets have declined to just CA$2.8 billion.

That’s not all; the company is still profoundly unprofitable, with a net loss of CA$107.2 million compared with net income of CA$10.4 million in the same period last year. Even though Aurora has approximately CA$250 million in cash on its balance sheet as of Nov. 6, that’s almost entirely thanks to the money it raised by issuing more stock.

Over the past 12 months, Aurora’s shares outstanding have increased from under 100 million to nearly 161 million. Raising more cash at the expense of investors to offset losses isn’t a sustainable strategy in the long run.

So why consider Aurora at all?

In the past week, Aurora stock is actually up more than 70% on investor optimism over a possible „green wave” in the United States. For starters, Vice President-elect Kamala Harris previously indicated that the administration of President-elect Joe Biden would decriminalize pot on a federal level. Additionally, Arizona, New Jersey, South Dakota, and Montana voted to legalize recreational cannabis as part of the 2020 election, putting further pressure on neighboring states to do the same.

Investors seem to think that these developments are bullish for Aurora. The company’s business fell hard when it tried to cater to consumer demand that never materialized, so it makes sense that Aurora may make a comeback now that its goods could be needed in America.

The opportunity to expand into a market 10 times as large as Canada (in terms of population) is lucrative for Aurora. Back in May, the company made the first push into the U.S. legal pot market by acquiring cannabidiol maker Reliva, which sells its products in over 20,000 retail locations, for $40 million.

Overall, there are still ample fundamental problems surrounding Aurora, and investors should definitely not expect the company to stop diluting its stock or turn a profit anytime soon. However, the stock’s price-to-sales valuation of just 4 also doesn’t reflect the growth opportunities ahead. For adventurous marijuana investors with a high-risk, high-reward outlook, now may not be a bad time to open a small stake. For others, I would advise waiting for the company to either make money or achieve substantial revenue growth before making a move.