Cannabis and hippies are synonymous with one another, joined at the hip in the history books and in popular culture, with a spliff never far from the mouth of a long-haired, bespectacled CND campaigner.

But the drug inhaled by the free-living spirits of the 60s and 70s was 14 per cent weaker than what is dealt on the world’s streets today, a study has found.

For cannabis resin, or hash, the modern-day variant is 25 per cent stronger than what was in circulation during the prime of the baby boomer generation.

The findings come from expert analysis of more than 80,000 weed samples which looked at the potency of cannabis over 50 years, starting in 1970. 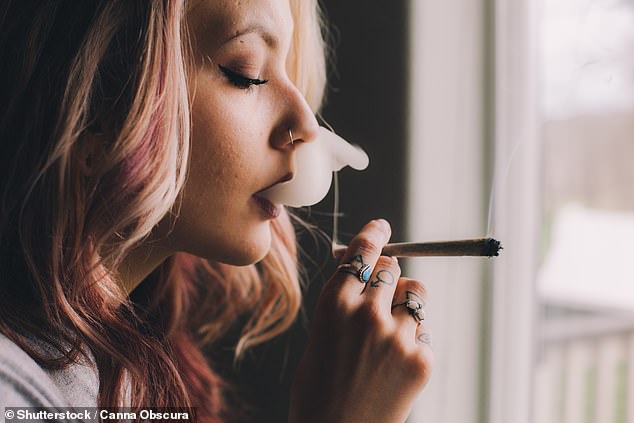 Herbal cannabis inhaled by the free-living spirits of the swinging 60s was 14 per cent weaker than what is dealt on the world’s streets today, a study has found (stock)

Researchers from the University of Bath gathered data from samples seized on the streets of the USA, UK, Netherlands, France, Denmark, Italy and New Zealand.

They focused on the concentration of two chemicals known to be prominent in the plant, delta-9-tetrahydrocannabinol (THC) and cannabidiol (CBD).

THC is the main psychoactive constituent of cannabis which is responsible for the the infamous high.

CBD, which is not intoxicating and has medicinal properties that are now being investigated by legitimate pharmaceutical firms.

A study, published today in the journal Addiction, found  THC concentration has increased by 14 per cent in herbal cannabis from 1970 to 2017.

This was primarily due to a rising market share of stronger varieties such as sinsemilla relative to traditional herbal cannabis which contains seeds and less THC, the researchers say. 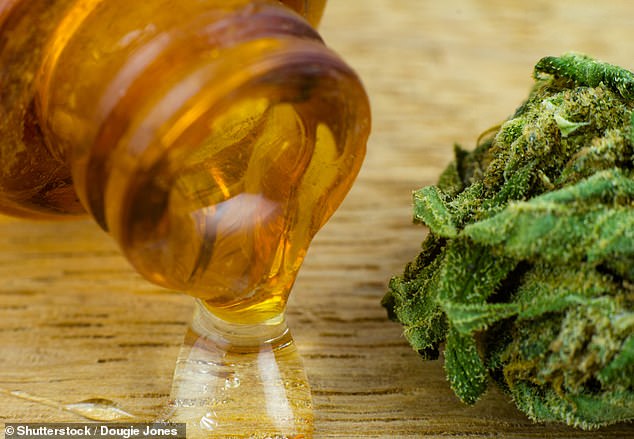 For cannabis resin, or hash, the modern-day variant is 25 per cent stronger than what was in circulation during the prime of the baby boomer generation. historically weaker than herbal cannabis, experts now say hash is stronger (stock)

For cannabis resin, also known as 'hash’ and is extracted from herbal cannabis, THC concentrations rose by 24 per cent between 1975 and 2017.

However, concentrations of CBD did not change over time.

Study co-author Sam Craft from the University of Bath explained: 'Cannabis resin – or 'hash’ – is often seen as a safer type of cannabis, but our findings show that it is now stronger than herbal cannabis.

THE DIFFERENCES BETWEEN THC AND CBD

Tetrahydrocannabinol (THC) and cannabidiol (CBD) are both derived from the cannabis plant.

Together, they are part of the cannabinoid group of compounds found in hashish, hash oil, and most strains of marijuana.

THC is the psychoactive compound responsible for the euphoric, 'high’ feeling often associated with marijuana.

THC interacts with CB1 receptors in the central nervous system and brain and creates the sensations of euphoria and anxiety.

CBD does not fit these receptors well, and actually decreases the effects of THC, and is not psychoactive.

CBD is thought to help reduce anxiety and inflammation.

’Traditionally, cannabis resin contained much lower amounts of THC with equal quantities of CBD, however CBD concentrations have remained stable as THC has risen substantially, meaning it is now much more harmful than it was many years ago.’

Hash is a derivative of the plant which comes as a waxy block and is used to 'supercharge’ joints or is used in a bong or vaporiser as well as in culinary items, such as 'hash brownies’.

It has traditionally been perceived as being weaker than weed, but the new research shows it is now more potent.

Dr Tom Freeman, director of the Addiction and Mental Health Group at the University of Bath, said frequent use of cannabis with higher level of THC carries an increased risk of problems such as addiction and psychotic disorders.

’As the strength of cannabis has increased, so too has the number of people entering treatment for cannabis use problems,’ Dr Freeman said.

’More Europeans are now entering drug treatment because of cannabis than heroin or cocaine.’

Dr Freeman said the increases in cannabis strength highlight the need to implement wider strategies for harm reduction similar to those used for alcohol, such as standard units and public guidelines on safer consumption limits.

’As the strength of cannabis has risen, consumers are faced with limited information to help them monitor their intake and guide decisions about relative benefits and risks,’ Dr Freeman said.

’The introduction of a standard unit system for cannabis – similar to standard alcohol units – could help people to limit their consumption and use it more safely.’

Cannabis is the most widely used illicit drug in the world but has recently been legalised in Canada, Uruguay and several states in the USA.

A recent vote in New Zealand saw the nation reject legalising the drug.