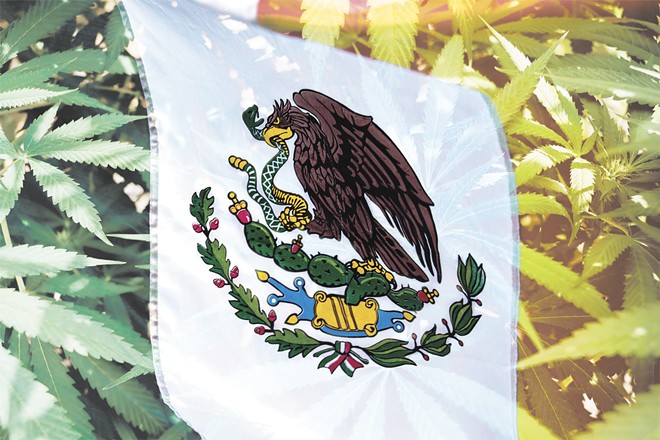 On Nov. 19, Mexico’s Senate voted 82 to 18 to legalize recreational cannabis and open a regulated market in the country.

This has been a wretched year by almost every measure. But as the year enters its waning days, cannabis policy reformers are doing everything they can to salvage the historical reputation of 2020.

In the Nov. 12 edition of the Inlander, the Green Zone section was dedicated to the wins cannabis delivered around our country on election night. In brief: Every cannabis policy reform ballot measure passed, and the number of states with legalized recreational markets jumped from 11 to 15. Forget about individual states for a moment, because our neighbors to the south are on the brink of doing something even bigger.

On Nov. 19, Mexico’s Senate voted 82 to 18 to legalize recreational cannabis and open a regulated market in the country. Mexico would become the third country on Earth to fully legalize recreational cannabis, joining Uruguay, which did so in 2013, and Canada, which did so in 2018. Mexico would also become by far the world’s largest legal market by population.

This news is just the latest in what has been a rapid series of developments in Mexico’s cannabis policy over recent years.

Medical marijuana has only been legal in Mexico since 2017 — California, by comparison, became the first state in the U.S. with legal medical marijuana way back in 1996 — and then, in October 2018, Mexico’s Supreme Court drew a line in the sand on the issue of recreational cannabis in the country. As the court saw it, there was precedent in the law giving Mexicans the right to consume cannabis.

“That right is not absolute, and the consumption of certain substances may be regulated, but the effects provoked by marijuana do not justify an absolute prohibition of its consumption,” the court’s ruling stated.

With that, the other branches of the Mexican government were compelled to end prohibition in the country. Two years later, they’ve almost done it.

The legislation still needs to pass through the lower house of Congress and then make its way past the president, very much like how things work in the United States. Fortunately for reform advocates, the party that advanced the legislation in the Senate, Morena, is also the party of the president, Andres Manuel Lopez Obrador, and holds control of the lower house as well.

There is a deadline of Dec. 15 for lawmakers to comply with the Supreme Court’s 2018 decision ruling that cannabis prohibition is unconstitutional in Mexico. ♦