In 2016, voters in California approved Proposition 64 (the Adult Use of Marijuana Act), which legalized adult use and sale of cannabis statewide. In Fullerton the road to official legalization and allowing legal cannabis businesses, however, has proved much rockier. On November 17, 2020, City Council approved an ordinance legally allowing a limited number of cannabis businesses in the City. However, at their first meeting of 2021, the newly-configured Fullerton City Council voted 3-2 to bring back the ordinance for discussion at their February 16 meeting, including the option to rescind the ordinance completely.

Cities retain a measure of local control over where and how many cannabis businesses are allowed. For the past four years, that number has been zero (officially). This has not stopped illegal dispensaries from popping up around the City, which are difficult to close down given due process provisions of the law. Police are generally not allowed to just “raid” and shut down illegal dispensaries. Instead, the city must go through a lengthy administrative process involving code enforcement, fines, and legal hearings.

How We Got Here

Following the passage of Prop 64, Fullerton City Council voted to ban all cannabis businesses in the City in 2017.

In October 2019, Council voted 3-2 to pass a “resolution of intention” to consider allowing some cannabis businesses in Fullerton. There followed a number of community meetings, a panel discussion, and a Q & A session.

In January, two newly-elected councilmembers were sworn into office—Fred Jung and Nick Dunlap. And at the January 19 meeting, these two new councilmembers voted along with re-elected Mayor Bruce Whitaker to bring back the ordinance for amendment, or possible rescission, at their February 16 meeting.

A key point of contention with the recently-passed ordinance, which took effect December 17, 2020, is residential “buffer zones”—that is, how far away potential cannabis businesses must be from residential properties.

The current ordinance has no residential buffer, although it does not allow cannabis businesses in residential zones.

The ordinance does have a separation “buffer” of 800-feet from schools, daycares, youth centers, youth organizations or club facilities, parks, playgrounds, city community centers, and libraries. It also requires a 300-feet buffer between retail locations.

During previous discussions, some councilmembers said they opposed the residential buffer because it would have the practical effect of concentrating most of the cannabis businesses in south Fullerton.

At previous meetings, many residents from south Fullerton have spoken in opposition to the ordinance—partly because of its disproportionate concentration in their area.

In the supporting materials for this agenda item, City staff included a number of maps, which included varying amounts of residential buffers. With each increasing buffer, the number of potential locations in which cannabis businesses may locate decreases.

Map of the original ordinance with allowable locations included: 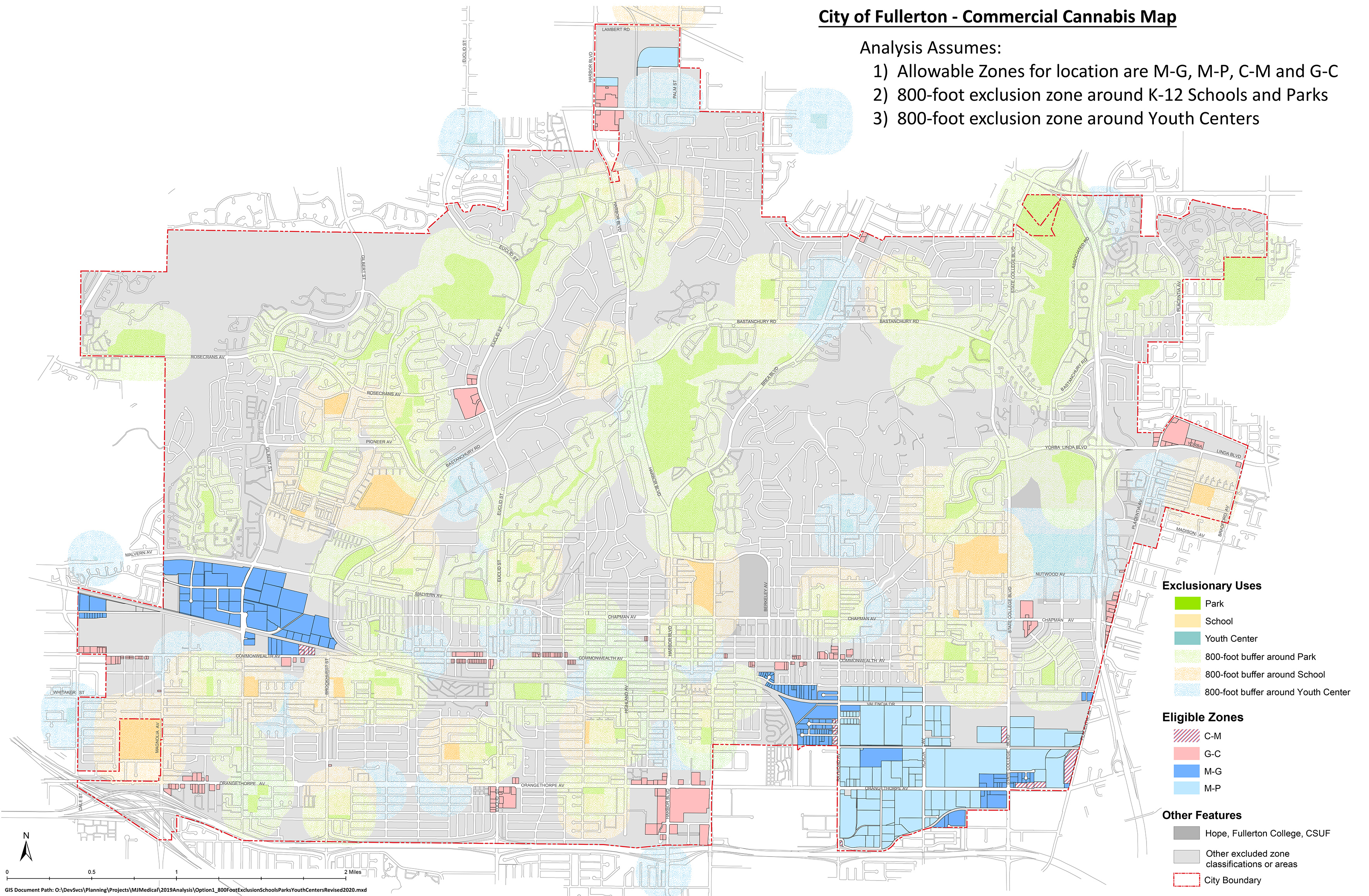 Here is a map of allowable locations should Council approve the more restrictive 1000-foot residential buffer. 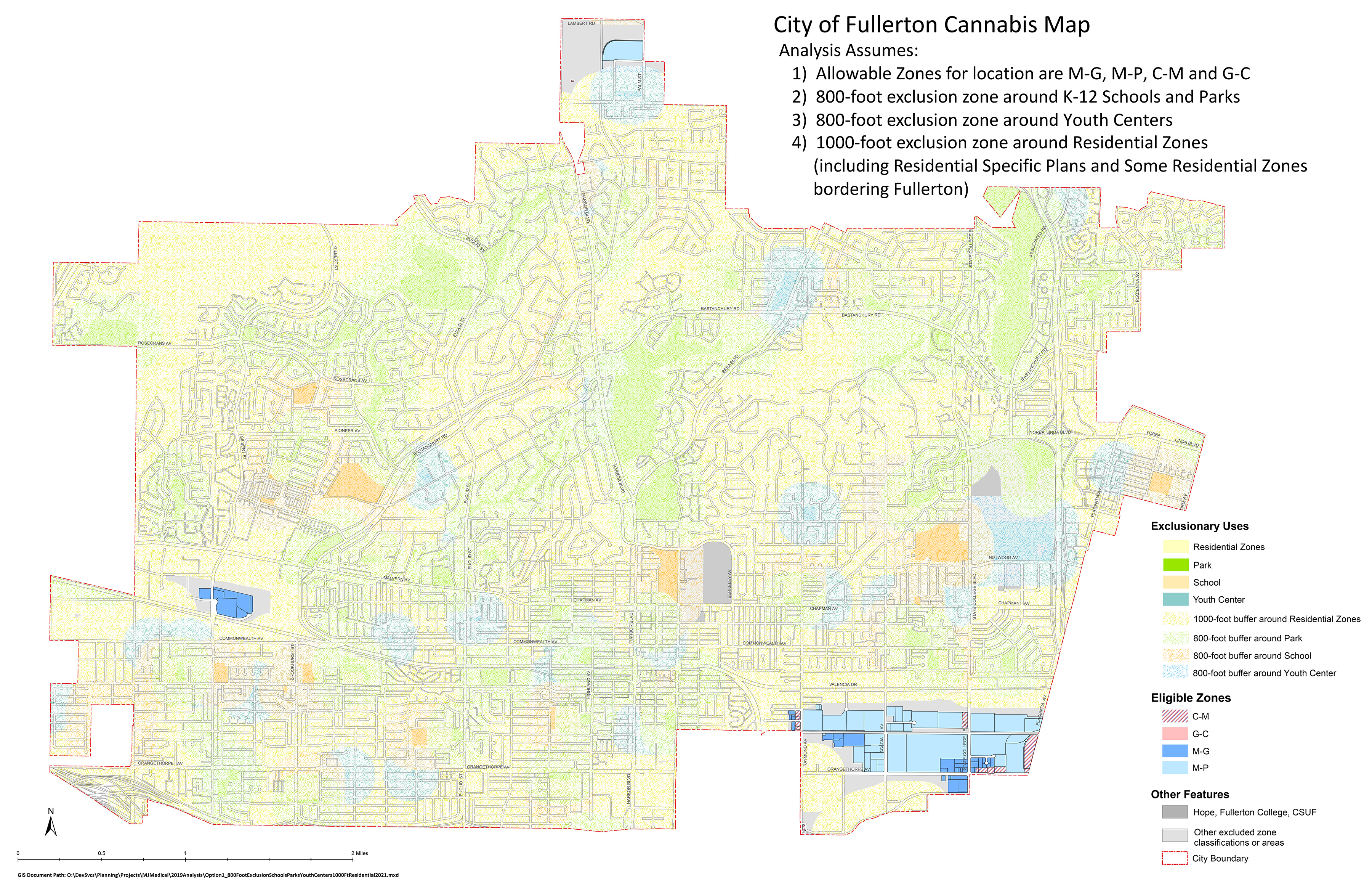 At the January 19 City Council meeting, some members of the public weighed in on Council re-considering the ordinance.

As at previous meetings, a number of residents of south Fullerton spoke in favor of reconsidering the ordinance, and against the ordinance in general, citing the negative impact cannabis has on young people in their neighborhoods.

Ilse Miranda spoke on behalf of a number of residents who had gathered outside Council chambers. “These are the ladies, the parents of Fullerton. These are the parents who are asking you to rescind the ordinance.”

Resident Christy Sims said she was in favor of “the possibility of rescinding the ordinance because of the overwhelming number of Fullerton residents against cannabis businesses in Fullerton.”

Fullerton resident Katie, a mother of three, spoke in favor of the ordinance, and against the new Council’s move to reconsider it.

“You are trying to take an ordinance that went through all the various steps, multiple public comments to get to the point we’re at, and clearly there is a lack of education about how pot stores work,” she said. “You can’t enter a pot shop unless you’re 21 years of age.”

Dana Cisneros, a cannabis attorney who was a presenter on a City-sponsored panel discussion, also spoke against continuing or rescinding the ordinance. “This has been a well-vetted and well-discussed ordinance,” she said.

A speaker named Connor also spoke against continuing or rescinding the ordinance.

“These continued delays, all they do is to continue encouraging and subsidizing the $10 billion illegal cannabis market in California,” he said. “And that market is made up of drug dealers who ply high schools and colleges and youth centers. Every week you delay this issue, you are allowing the $10 billion illegal cannabis market to continue and endanger the children of the City you’re supposed to represent.”

Former City Councilmember Jan Flory, who had voted for the original ordinance, spoke against re-considering it.

“We’ve been dealing with this issue since 2016. We have had numerous community meetings, much outreach to the community, three very hotly contested hearings on the matter, and it seems to me that this was presented as an amendment to the ordinance to discuss buffer distances, and now it’s turned into something quite different,” Flory said.

After listening to public comment, Council discussed the item.

Mayor Pro Tem Dunlap made a motion to continue discussion of the ordinance to Feb. 16, along with a possibility to rescind it.

“There’s this policy that we’re kind of rushing to throw down, and I don’t think that’s the way to enact a policy like this that’s going to affect so many in the community,” Dunlap said.

Councilmember Silva, who voted against Dunlap’s motion, said, “We have not tried to rush this through…We put it out for the public…It’s been going on for four years now.”

Councilmember Zahra, who also voted against the motion, said that many community members were prepared to speak at the Jan. 19 meeting.

“A lot of community members sent messages, e-mails, petitions, a lot have submitted comments tonight. I don’t see why we cannot address this today, or at least have a discussion on what you brought to us to address,” Zahra said. “I’m a little hesitant on moving something that everyone came prepared to speak on.”

Councilmember Jung, who supported the motion to continue the item, said he’d be open “to consider residential buffers of 500-1000 feet.”

“The reason why we want to continue this matter for a meeting itself is to be able to take the discussion and the time to hear all the voices in the community, not just the folks who are for it, but those who are against it, as well,” Jung said.

Mayor Whitaker, who supported the motion to continue the item, said, “The reason this was carried forward is because this item bridged both Councils—the prior Council and the new Council. And there was a lot of sentiment expressed even at the time this was passed to allow the new Council to put some of its stamp on it. So that is really the input that needs to be provided here.”

Mayor Pro Tem Dunlap said he didn’t mean to shortchange the efforts that have been done through community outreach. “I think it’s the policy and the ordinance that was put forward that was rushed. It was a blitz of sorts to try to get it done as opposed to enacting a policy. That’s why I’m supporting the continuance so that it can be properly deliberated, so that something like this doesn’t ultimately end up getting decided by a ballot initiative.”

Ultimately Council voted 3-2 (Zahra and Silva “no”) to bring back the ordinance for possible amendment or rescission at their Feb. 16 meeting.

Meanwhile, on January 15, the City received a notice of intent to circulate a petition to put the cannabis ordinance on the ballot. If passed, this ordinance would supersede any Council action.

According to Domer, the ordinance connected to the petition largely mirrors what Council passed last year.