A marijuana retailer may be coming to a Fresno neighborhood near you.

The city of Fresno released the names and locations of 20 social equity applicants last week, along with the previously known 74 regular applicants.

Fourteen locations will ultimately be selected from the 94 applications for retail marijuana sales. Stores could open by August.

Click on map to zoom and scroll to individual locations.

Rules passed by the Fresno City Council allow for up to two retail shops per council district. Between two and four of the 14 chosen must be from among social equity applicants, but they are not restricted to being located in a given district.

Social equity applicants had to meet certain criteria such as income, past convictions for cannabis-related crime, and past residency in economically or environmentally disadvantaged neighborhoods (as determined by state data). An equity applicant must be a majority owner of the cannabis business.

The city will also consider applicants for cultivation and “microbusinesses,” which are separate categories for approval.

When the city manager’s office makes its recommendations for the 14 locations, the City Council will still have to approve conditional use permits.

Regulations require that marijuana retailers only be permitted in specific, commercially zoned areas.

Restrictions include being at least 800 feet away from another cannabis retailer, schools or youth-oriented facilities. The rules do not require a minimum distance from places like churches, residential neighborhoods, or drug rehabilitation centers.

Looking at the map, at least three proposed locations, including one social equity applicant, are within 800 feet of a the BAART drug rehabilitation center at 539 N. Van Ness.

Several more are within 800 feet of a residential area.

District 3 Councilman Miguel Arias says those issues can be examined during the conditional use permit process.

GV Wire℠ requested the applications of all retail business locations through a public records act request with the city. Such documents are public records and the city’s cannabis code mandates they be posted online.

Instead, the city provided a 2,902 page document, with only 11 pages visible. All the remaining pages containing information on companies that have already been eliminated from consideration was redacted.

“Disclosure of these records prior to completion of the City’s permit process would divulge details of competing applications to other applicants and impair the selection process,” Chief Assistant City Attorney Tina Griffin wrote.

The city also claimed exemptions from disclosure based on considerations of privacy, confidential financial information, and trade secrets. 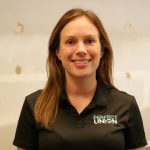 “We look at this as an opportunity to actually revitalize part of the community and to bring cannabis to folks who need it.” — Caity Maple, Perfect Union

Some proposed companies reached out to GV Wire℠ and granted interviews.

“We look at this as an opportunity to actually revitalize part of the community and to bring cannabis to folks who need it,” said Caity Maple, vice president of government affairs and compliance with Perfect Union.

Maple says they have already leased the building at a cost of at least $100,000. If granted an application, they plan to spend another $100,000 to renovate the building.

Companies are not allowed to lobby city officials during the process.

“It helps us, frankly, for us as as a company because we have a demonstrated record of success and there’s not a lot of companies that have the history that we do,” Maple said.

Perfect Union operates eight other retail marijuana locations in California, the closest to Fresno being in Turlock.

“If you don’t have a background in doing this, in this industry, it’s incredibly complex. The regulations are tough. And if you don’t have that experience, it’s really hard for you to be successful,” Maple said.

District 3 leads all council districts for the most applicants overall with 30, and most of each type — 21 standard and 9 social equity.

The fewest applicants are found in District 5, covering southeast Fresno.