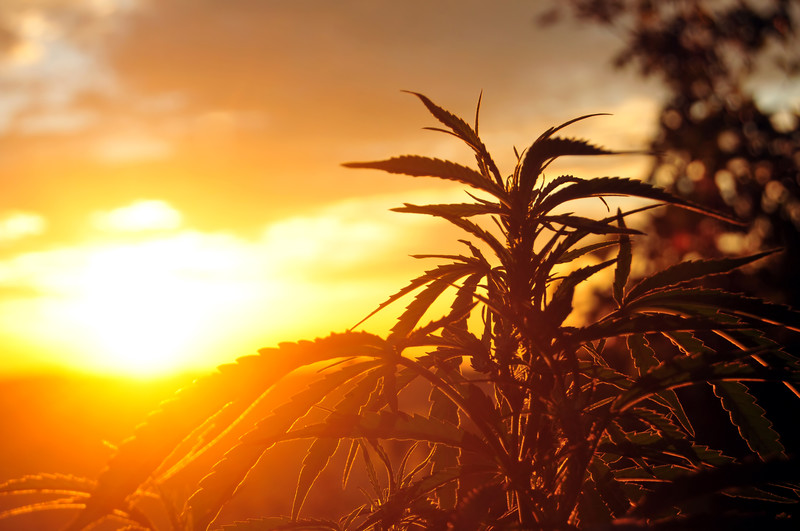 Silhouette of marijuana plant at sunrise. [Image from CanStockPhoto]

Please note: The reporter for this piece was previously an employee of Attorney Ed Denson, one of the attorneys representing the permitted cannabis farmers in this suit.

Cannabis farmers have been on the edge of their straw bales for nearly four years, twiddling their green thumbs, as they patiently waited for the final ruling in Humboldt County’s amendments to the Measure S lawsuit. Good news for farmers, on March 11, 2021, the California’s First District Court of Appeals ruled in their favor on all issues.

The tentative opinion made late February was upheld. It states, “A group of challengers, including respondent Karen Silva, sued [Humboldt] County to overturn the amendments, and the trial court agreed that the amendments had impermissibly broadened the scope of the tax.”

The Board of Supervisors approved Humboldt County’s amendments to Measure S on June 6, 2017 and again on April 3, 2018, which the plaintiff’s attorneys, Eugene Denson and Fred Fletcher who were later joined by Appeal attorney Jay Moller, argued was “illegal” essentially because those changes required voter approval.

County voters, taxpayers, and marijuana advocacy organizations joined together wit farmers–some still in the permit process–in a lawsuit against the County for cultivation taxes paid, that they claimed were not owed based on the Measure’s original text.

In respondent Karen Silva’s case, she paid $40,000 in 2017 for having a permit to cultivate, even though she did not grow that year. Silva is not alone, there are multiple permit holders who did not cultivate but still paid the tax.

The county maintained the tax was on the permit, for “the right to do business,” [Listen to former Humboldt County Counsel Jeff Blanck at minute marker 1:10 Kmud News Story] not on cultivation itself. Then the County taxed farmers for having a permit based on the square foot of the cultivation area, instead of the individual plant canopies. The county also billed landowners instead of permit holders.

The three issues raised in the lawsuit’s appeal are
…whether the amendments impermissibly broadened the scope of the tax by
[1.] extending its reach from cultivators to property owners,…
[2.] by expanding the taxable property from areas actually “cultivated” to all areas “permitted” for cultivation, …
[and 3.] whether the amendments expanded the scope of the tax by changing the time when the taxes start to accrue.

The county’s argument was, “The Board’s amendments did not impermissibly alter Measure S but instead merely clarified some of the measure’s ambiguous terms.”

The County stated it was necessary to alter the Measure’s wording to “allow efficient administration of the tax and to prevent fraud by cultivators who underreport the area of their grows.” They added that “such fraud would be difficult to prevent in a sprawling, rural and forested county like Humboldt.”

However, Judge Neel said the County’s claims are “without support in the record.”

Humboldt County brought procedural arguments for the first time on appeal on issues including standing and exhaustive remedies, but the court found none to be persuasive. (The court had previously ruled in favor of the County on two other issues regarding whether taxes were owed biennially v. biannually, in addition to the requirement for Federal compliance to owe the tax. However, the plaintiffs did not cross appeal those matters.)

The court ruled in favor of Silva et al. on all matters saying,

So what does this ruling mean for permitted cannabis farmers? Will they get their taxes returned that they did not owe based on the original Measure S wording ? Should farmers rush out to calculate the area of walkways and companion plant canopies?

The roll out for potential refunds and the exact implications of this decision are yet to be determined. The County still may attempt to defeat Judge Kelly L. Neel’s ruling by asking the Appeals Court to take a second look, and/or by appealing to the California Supreme Court. They have 40 days to act and if they don’t, then the ruling is final.

Attorney Eugene Denson further elaborates on what to expect, “If the County does appeal to the California Supreme Court it could be months before the court accepts or denies the appeal. So we still do not know if the new ruling is the final ruling, or whether the County will voluntarily refund the illegally collected taxes if they finally exhaust their judicial remedies.”

Appeal Attorney Jay Moller seems optimistic though, commenting on the decision, “It’s official. WE WON. This was a near frivolous appeal… there’s no chance of overturning this bullet-proof appellate decision with a petition for rehearing, petition for review in the CSC, or cert petition in the USSC…Ed and Fred did a good job and Judge Neel wrote an admirable decision. The County should be ashamed for wasting so much money on this litigation.”