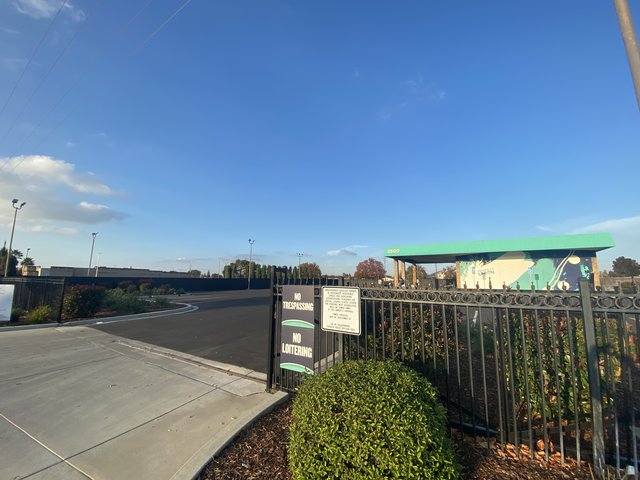 The Turlock City Council on Tuesday denied an appeal from marijuana dispensary Perfect Union, which was seeking a variance from a sign ordinance so that they can let drivers know where their business is located.

Perfect Union, located on Golden State Boulevard, has experienced lower-than-anticipated sales since opening over a year ago, and the company hoped the City would make an exception in its ordinance for dispensary signs to allow advertising along the busy road.

The business submitted a variance application to the City in June 2021, requesting permission to deviate from standards set in the Turlock Municipal Code which prohibit standalone monument signs for cannabis companies. Dispensaries are only allowed to have one on-site wall sign which displays only their business name.

The dispensary currently has a mural on the front of its building depicting its name and removed an existing, unpermitted pole sign upon moving into the 2500 N. Golden State Blvd. in September 2020. Citing slumping sales and difficulty competing with Turlock’s other cannabis dispensary, which is located right off the freeway, Perfect Union requested the sign variance because their building is 113 feet back from the road and customers have difficulty finding the business.

In the variance request, which was originally denied by the Planning Commission on Sept. 2, Perfect Union asked for consideration of two options: a six-by-six monument sign located outside of the location’s fence in the public right-of-way, or a 12-by-eight monument sign located five feet back into the property.

Perfect Union appealed the decision to the City Council, stating that the Commission erred in their decision because they stated they did not want to set a precedent for other cannabis companies.

The Council first heard the appeal from Perfect Union on Oct. 26, and directed staff to work with the dispensary on a more code-compliant sign. On Tuesday, a new sign option was presented: a six-by-six monument sign with a stone base structure outside of the fence which would display only the business name and address.

“They took the monument sign that was their first option and made some modifications and changes,” Deputy Director of Development Services and Planning Manager Katie Quintero said. “They brought it as close into compliance with any other monument sign, but there is still a variance because the municipal code ordinance for cannabis signs says they cannot have one.”

Perfect Union’s Vice President of Government Affairs & Compliance, Caity Maple, told the Council in October that customers have complained about their building being hard to find. When the Journal posted a story about that first meeting to Facebook in early November, a majority of commenters noted that prices were a deciding factor in where they decide to purchase cannabis.

“We think we have some very specific circumstances related to our building that make it very difficult for us to be found. In preparation for this meeting, I watched that previous hearing and I just wanted to note that we had no opposition from the community, and in fact, we had several members of the community that were not necessarily supportive of cannabis speak up in support of us having this monument sign…,” Maple said on Tuesday.

One of those Turlock residents was Robert Puffer, who also called in to this week’s meeting in support of the dispensary sign.

“They’re coming to you asking for a variance to add a sign that any other business in Turlock, except for a cannabis business, would be granted,” Puffer said. “…Please show that this Council actually wants businesses to succeed in Turlock.”

Councilmember Rebecka Monez said that she had received emails both in favor and in opposition of the sign and lamented the tough decision as a small business owner herself, while Vice Mayor Pam Franco stated that approving the variance would in fact set a precedent for other dispensaries hoping to have signage outside of their business.

“We know how to find what we want to find. In today’s technology, it is not that difficult,” Bublak said. “It seems to me that they knew where they were located. We tried to find something that was a happy medium, but people are still not going to find it. People are still aren’t going to see the sign. You’re going to have to try a different avenue of getting the people’s attention.”