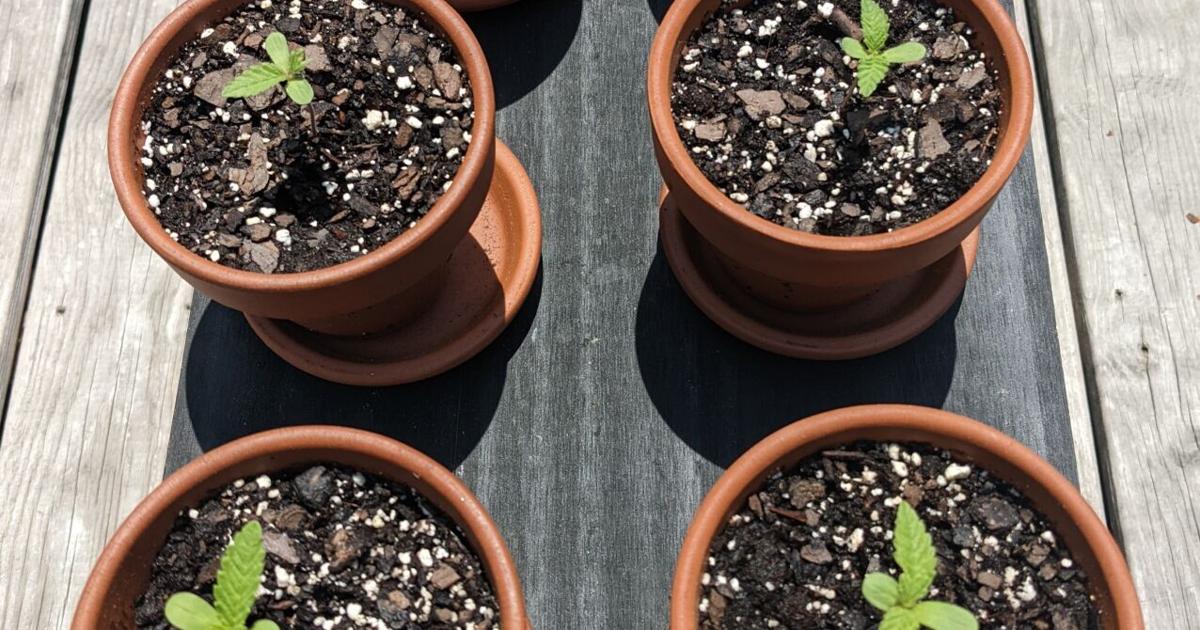 In case you hadn’t noticed, we’re a couple of weeks into growing season. Temps are supposed to top 90 degrees for the next three days. And that means it’s a perfect time to get your legal cannabis plants underway.

Under a Virginia law that went into effect last summer, small home grows of marijuana are legal. Anyone aged 21 or over can grow up to four plants, so long as they keep them on the downlow. (More details on the law are below, along with information about where you can still get free seeds.)

I dropped six regular cannabis seeds into individual pint-sized clay pots last week, along with some potting soil recommended by a clerk at Northwest Hardware. (They also sell liquid nutrients for cannabis and other plants.)

Three came from seeds I picked up at a seed giveaway last fall at WellNest on Church Avenue. The other three came from a mostly seedless plant that a friend of mine grew in his back yard in Raleigh Court last summer. You could say I personally investigated its potency.

Anyway, after a few days of keeping the clay pots wet and in the sun, the seeds began sprouting. So now I’ve got five little devil’s lettuce babies growing on my south-facing deck, two of which are almost 3 inches tall. Only one of the seeds (from the seed giveaway) is like a dud so far.

To make this gardening adventure even more interesting, I’ve named my pot plants after certain area politicians, none of whom to my knowledge uses cannabis.

The biggest one I named Mayor Sherman Lea, after Roanoke’s top elected official, because he’s a big and imposing character. You could say I have high hopes for Mayor Sherman Lea plant’s future. I’m estimating it’ll be 9 feet tall and 4 feet wide by harvest time.

The next biggest plant is named Del. Chris Head. The Botetourt Republican has believably sworn to me that he’s never partaken of cannabis. Head voted against the state law last year that legalized small home-grows.

But he’s also confided that if the General Assembly ever legalizes recreational sale of weed, he might try a gummy just to better understand what all the fuss is about. That tepid curiosity is why I named plant No. 2 after him.

Plant No. 3 bears the moniker Rep. Morgan Griffith after the Republican congressmen from Salem. He’s been supporting medical marijuana legislation for 25 years. The most recent version is the Medical Marijuana Research Act. Griffith was a co-sponsor.

It passed the House 343-75 on April 4, and all 75 of the “nay” votes came from other Republicans in Congress. Griffith’s press shop touted his vote that day in a news release that noted he had co-sponsored identical legislation in years past.

“Decisions about marijuana policy must be based on facts and evidence, yet current federal law makes collecting this data extremely difficult,” Griffith said in that news release. “I cosponsored the Medical Marijuana Research Act to expand opportunities for scientists to get the information we need about marijuana’s potential benefits and harms.”

In fact, Virginia was the first state in the nation to legalize possession of marijuana by certain cancer and glaucoma patients who had a physician’s approval. That law passed way back in 1979. But it proved unworkable because there was no way for patients to legally procure pot.

As a state delegate in 1997, Griffith fought efforts to repeal that unworkable law. (However, with respect to legalizing recreational marijuana, he told Cardinal News last month “I’m not there on that.”)

Plant No. 4 is named for the other congressman from Western Virginia, Rep. Ben Cline, R-Botetourt. Cline, a former Virginia prosecutor, voted for the Medical Marijuana Research Act that Griffith co-sponsored.

Cline also helped move Virginia toward workable medical marijuana legalization when he served in the Virginia General Assembly. In the 2018 legislative session, he was the principal sponsor of a law that allowed medical practitioners to legally prescribe CBD oil and THC-A oil.

That legislation passed without opposition and it set up the “medical certification” framework lawmakers later adopted for medical cannabis, which is why we have dispensaries in Virginia today.

So Cline has earned his name on one of my plants, too.

The fifth plant is an itty-bitty little number, but it appears hardy. It was the last of my bunch to sprout. I’ve named that one after Del. Sam Rasoul, a Democrat from Roanoke.

Like Head, Rasoul has told me he’s never tried marijuana. But he’d been a leading a leading proponent of decriminalization since he entered the Virginia General Assembly.

Last year Rasoul voted for the law that legalized possession of up to an ounce, and for legislation that would allow recreational weed sales beginning in 2024. He also supported an amendment last year by former Gov. Ralph Northam that legalized small home grows. So arguably, he deserves a plant named after him.

As noted earlier, the sixth seed was a dud. So I’ve named it after David Bowers, the former Roanoke mayor and councilmember. Apparently, he’s running for Roanoke City Council once again. Yawn.

And if/when it does, I’ll have six itty bitty pot plants, which won’t be tiny for long because they really do grow like weeds, if 3 inches in a week is any indication.

Yes, that exceeds the allowable number of plants under state law. But recall, I planted normal seeds, which means that — roughly — three will be male plants and three will be females.

Only the females are useful for marijuana’s intended purpose. The male plants won’t get you high at all. And if pollen from the males fertilizes the females, it will lower the females’ yield.

So I’ll kill the males plants once I’ve identified their genders. The likelihood is, I’ll have between one and four virgin female plants after I get rid of the males.

Current law allows up to four plants per household at the same time. They’re legal to grow in your back yard so long as the plants are out of street view, and so long as you take precautions to keep your plants out of the hands of minors. (The law doesn’t define the precautions, however.)

Each plant is also supposed to be tagged with the grower’s name and a note that they’re for personal use. I haven’t tagged mine — yet — but when I do, it’s going to be with male politicians’ names, even though by then all the plants will be females.

And I’ll keep you posted on their progress.

By the fall, I may just have a bunch of Del. Chris Head-branded weed on my hands. And perhaps loads of buds from Rep. Morgan Griffith and Mayor Sherman Lea, too. We’ll see.

Incidentally, if you haven’t planted your marijuana yet, there’s still time. And, there’s yet another statewide cannabis seed giveaway coming up May 28, in Norfolk, Newport News, Williamsburg, Richmond, Fredericksburg, Charlottesville, Harrisonburg, Collinsville and Newport News. (Details can be found on virginiaseeds.com).

Jonathan Zinski, a hemp farmer in Gladys who’s organizing the giveaway, said he’ll be giving away 15,000 seed packs that will each have three to five seeds.

He hasn’t yet lined up business distributors in the Roanoke and New River valleys for May 28. Anyone who’s interested can contact Zinski at consulting@rezinbotanicals.com.