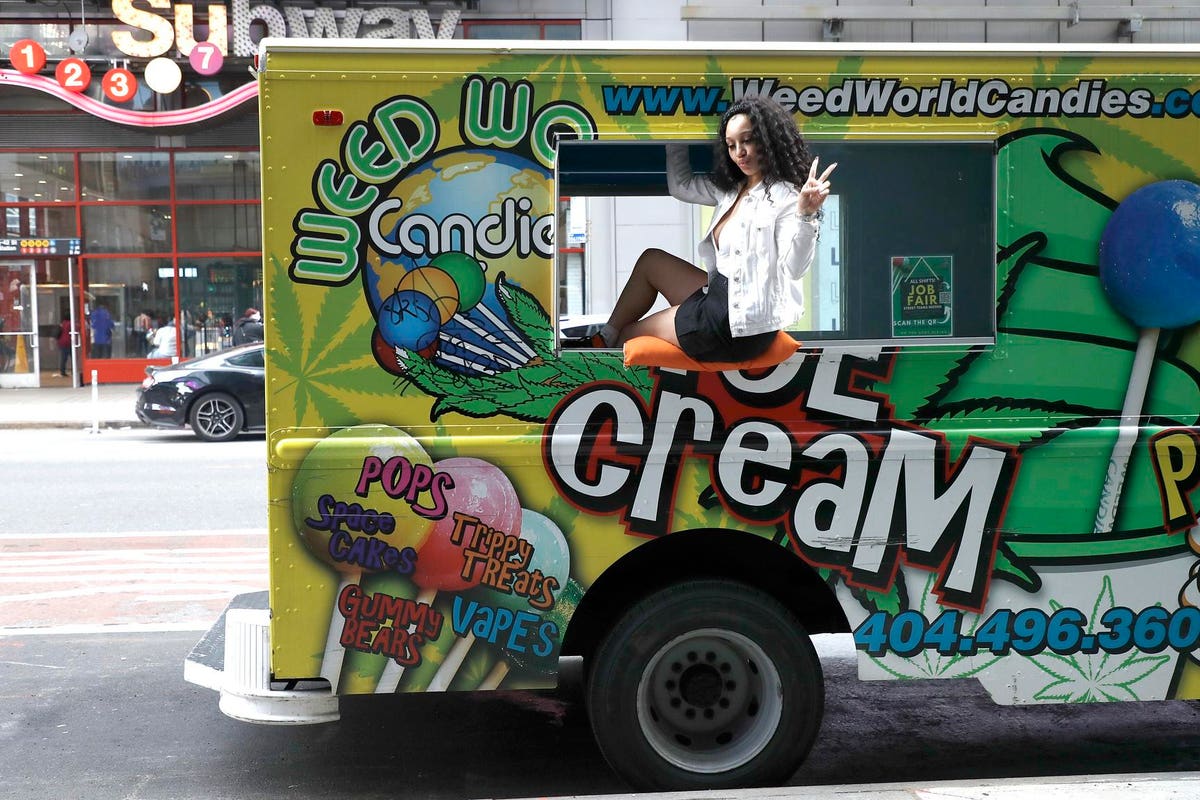 After marijuana was legalized, countless unlicensed dispensaries and pot shops flowered around the city. Now Mayor Eric Adams says the partying’s over.

The sheriff has come to New York City to instill law and order in the wild, wild west of weed.

On November 16, police arrested two people for selling cannabis and untaxed and illegal tobacco products out of a store on Third Avenue and 73rd Street in the Bay Ridge neighborhood of Brooklyn. A joint task force composed of New York City Sheriff’s Office, the New York City Department of Consumer and Worker Protection, the New York City Police Department and the state’s Office of Cannabis Management conducted a search after getting a bevy of complaints from residents about how the store, Big Chief, was openly selling marijuana without a license as well as illegal nicotine vaporizers.

A smoke shop in Manhattan’s West Village and another in the Bronx were also raided last month. New York City Mayor Eric Adams says that the joint interagency enforcement pilot program has already seized nearly 100,000 packages and cartons of cannabis and issued more than 300 civil and criminal violations.

“These unlicensed and unregulated shops not only undermine the legacy operators that legalization is intended to help,” Mayor Adams tells Forbes, “but they also threaten the health and well-being of New Yorkers, particularly young people.”

New York City Sheriff Anthony Miranda told LLN NYC, which was on the scene during the Brooklyn raid, that it was the first of many enforcement actions aimed at taking down New York’s thriving gray cannabis market. “This is a danger to the community,” Sheriff Miranda said. “Currently, it is illegal to sell any marijuana.”

And yet unlicensed cannabis shops and convenience store owners began selling pot last year thanks to a loophole in state law. Some attorneys who represent unlicensed cannabis merchants argue that the language of the current law narrowly defines a sale as a financial exchange, which is why they advise clients to operate under a gifting or club membership model.

“Whether we like it or not, this is what the industry has shaped up in New York,” says attorney and accountant Paula Collins, who represents several unlicensed cannabis dispensaries and bodegas. “The reality is, it’s here.”

And the state deserves some blame. In March 2021, New York legalized recreational cannabis but regulators have been slow to give out dispensary licenses. In the meantime, the city’s legacy pot market has been operating openly to serve the multi-billion-dollar cannabis economy. Last week, the state gave out the first 36 retail licenses to people who have been charged with a drug crime and the first legal sales are expected to launch this month.

But with two markets—the legacy market and state’s yet-to-be-launched legal market—operating at the same time, there’s is also a lot at stake. New York is projected to become the nation’s second-largest legal cannabis market after California, with an estimated $4.2 billion market within five years. The Marijuana Regulation and Taxation Act legalized pot in a way that effectively sidelined police and prosecutors looking to rein in the gray market. As the state sunsets its war on weed, enforcement has been relegated to issuing fines to scofflaws and impounding weed trucks for parking tickets or food vending violations.

“The law, as currently written, does not provide an enforcement mechanism when an unlicensed establishment displays cannabis for sale,” a spokesperson for the NYPD’s Deputy Commissioner, Public Information, says. “The law only provides an enforcement mechanism if an actual sale is observed, and even then, the penalties are limited due to issues with the law as written.”

A bill was introduced in Albany during the last legislative session that would have criminalized gifting and membership models, but it was not put to a vote. Now, with unlicensed dispensaries flourishing across the city and state, and no appetite to revive a war on pot and arrest hundreds of people, the state is stuck with its gray market.

MORE FROM FORBESWelcome To New York, The Wild West Of WeedBy Will Yakowicz

Paula Collins’ clients, many of whom are longtime weed dealers, want to get licensed and go legit. But the state’s licensing process is taking a long time. And closing their existing businesses while they await a license, which is what state authorities suggest, is not an option, Collins says.

“My clients are not thugs—these are not people who are bad, these are people who really want to do the right thing, pay their mortgages, send their kids to college and step out into the light of day,” says Collins. “2021 was a long time ago and the state had its time to get it together and they’re just not.”

If it were up to Collins, she would propose a framework that issues provisional licenses to everyone who wants to sell cannabis, collect sales tax on those sales, and allow people to renew their licenses every two years if they comply with the rules and regulations.

State regulators, meanwhile, have been trying for months to scale back the gray market. In February, the Office of Cannabis Management, the agency tasked with giving out licenses and regulating the legal marijuana industry in New York, sent out cease-and-desist letters to many unlicensed dispensaries, threatening legal action and a lifetime ban on entering the state’s legal industry. But most pot entrepreneurs did not heed the warning and even more unlicensed shops have opened since.

For now, regulators are relying on raids, summonses and tough talk. Aaron Ghitelman, the deputy director of communications for OCM, says the agency has the power to “permanently bar” people from the legal industry if they don’t comply with the rules. “Simply put: You need a license to sell cannabis in New York,” Ghitelman says.

Craig Sweat is the exact type of person New York is trying to support in the legal industry with its social equity program. Sweat, a Black man from Harlem, was sentenced to 21 years in prison on a RICO charge related to a cocaine distribution ring when he was 24. He got out six years ago and launched Uncle Budd, a company that parks green dispensary trucks around the city offering weed in exchange for donations. “I’m not selling anything. If you donate, cool; if not, cool,” says Sweat. “It’s not about just getting around the law—it’s just to show people it’s time for change.”

In September, the New York City Sheriff’s office impounded four of his mobile dispensaries. Now with only one, parked on 116th Street and Frederick Douglass Boulevard, Sweat also operates a cannabis delivery app. He currently does not have a license, but he says he will apply for one eventually.

For Sweat, it’s time for the Black community to get what it deserves—which means being granted the first licenses and an opportunity to earn a living selling cannabis legally. In America’s $25 billion legal cannabis market, only 2% of business owners are people of color.

“I got into this because I’m tired of seeing Black culture struggle,” says Sweat. “I know what this can be: the 40 acres and a mule we’ve been asking for.”

As for the New York crackdown, none of Collins’ clients who were raided were actually arrested. The shop owners are getting a summons, but most of the cops aren’t submitting them to the court, so Collins believes it’s just a scare tactic. To top it off, many stores that were raided are also selling untaxed cigarettes, which she believes is a more serious legal threat than selling weed.

“They killed Eric Garner over that,” says Collins, citing the man killed by police in Staten Island in 2014 for selling loose cigarettes. “New Yorkers take their cigarettes very, very seriously. I tell all my shop owners, ‘I realize you’re selling weed, but leave the cigarettes alone. Don’t even go there.’”

On 39th Street and Seventh Avenue, a 39-year-old hustler who goes by “JR” stands behind a folding table, selling weed like sidewalk vendors a block away are selling pashminas. He started selling pot in Harlem at 14, working from noon to 8 p.m. and making about $100 a day. Now he says he makes more than a thousand a week selling THC gummies and regular old pot to tourists and people leaving work in Times Square. But cops have started to give him tickets.

“The police have been bothering us,” says JR, explaining he’s gotten about five tickets over the last few months, one of which was for distributing food without a license. He hasn’t paid any of them yet, and at least one summons got dismissed.

JR knows he’s not supposed to sell weed, but he’s saving his money to apply for a license and go legit. In the meantime, he will continue to do what he has been doing for decades: selling weed to New Yorkers and dodging the cops. “We’re not going nowhere,” he says, “so they just have to deal with us.”