So, what news dominated the headlines in the United Kingdom last week? Well, it’s the usual: Boris Johnson, Love Island melodrama, cannabis legalization, even more Boris, – wait, what? Cannabis legalization? Yes, you’ve read that right. In a very significant moment in modern U.K. politics, three MPs including the very vocal David Lammy of Labour have come out in support of the drug, claiming in a BBC Newsbeat documentary that weed could be legal in just five years.

The three went on to say that their change in stance was to ensure the market is legalized, regulated, and taken away from criminal gangs. The cogs are finally beginning to turn. But this debate hasn’t just come out of the blue; it all stems from the historic moment that went down in the Commons in October when Home Secretary Sajid Javid announced legislation allowing the use of medicinal cannabis in the United Kingdom.

Making medicinal cannabis available on prescription will benefit the lives of ill patients currently suffering in silence. There is nothing harder than seeing your loved ones in pain – which is why I have taken this decision https://t.co/ZFmGgWdJgE

All of this comes after the historic test case of 12-year-old Billy Caldwell, who was denied cannabis oil to treat epileptic seizures. Doctors were eventually allowed to treat the boy with the oil under a special 20-day license, following intense media coverage and a lot of awkward interviews with some clearly high protestors.

But interestingly, Javid made one thing very clear: this inquiry was in no way the first step to the legalization of cannabis for recreational use. It was a firm statement, accompanied by strong hand gestures and dramatic pauses. So that’s that then? Probably not. Let’s put the cards on the table – there is an ominous feeling in Whitehall that the Home Secretary may have inadvertently opened the first door of the marijuana legalization advent calendar.

But there’s an unwritten rule when it comes to legalizing something which has been taboo for quite some time: nothing is cut and dry. The lines between what is purely medicinal cannabis and what is recreational cannabis will always be as clear as Labour’s Brexit policy (calm yourselves keyboard warriors, it’s not the time).

Why can’t someone who’s been prescribed marijuana by their doctor have the same rights to buy it recreationally? And who determines what is medicinal and what is recreational? You see, the answers are as clear as mud. The Conservative’s current line on cannabis is that “there is clear scientific and medical evidence that cannabis is a harmful drug which can damage people’s mental and physical health, and harms individuals and communities. We have no plans to change the law.”

Labour believes something along the same lines, but there have been a few whisperings in the shadows that a Labour government would decriminalize cannabis. This would mean you’d no longer get fined for having a joint on you, but you won’t find it in the fresh produce aisle in your local Tesco anytime soon.

Let’s face it. The government stands to profit from legalization: the Treasury will pocket a wad of cash from regulated global cannabis markets – £3.5 billion ($4.2 billion) to be exact – which definitely sounds like a tasty proposition for many in Westminster. And to top this off, the former Durham police chief Mike Barton conceded that, according to his experience (fighting drug crime, not doing drugs that is), the status quo had irrevocably changed, and regulated markets were the only way forward.

To give this story a personal spin, the possible legalization of cannabis sometime in the future will be irrelevant to most cannabis users, especially for those at university like myself – for whom rolling a joint is almost a rite of passage. Drug use in university students is grossly underestimated – about 2 in 5 of students are current drug users, while 56 percent have had some experience with drugs.

The threat of a 5-year prison sentence is simply not deterrent enough to stop students across the country indulging in recreational cannabis use. It’s become so lax that most institutions across the U.K. have mere warnings as their main form of punishment. And let’s not get into the number of times I’ve seen a clearly stoned student trundle in at 9:28 on a Monday morning blaming the “chaotic public transport,” despite living in halls down the road.

So, what now? Cannabis-based medicines are technically legal, but there hasn’t been a single doctor as of yet who’s actually prescribed it. Technically, you could be prescribed cannabis and use it recreationally, but to supply it would be illegal, meaning that regulation of cannabis does exist in the U.K. and does work. 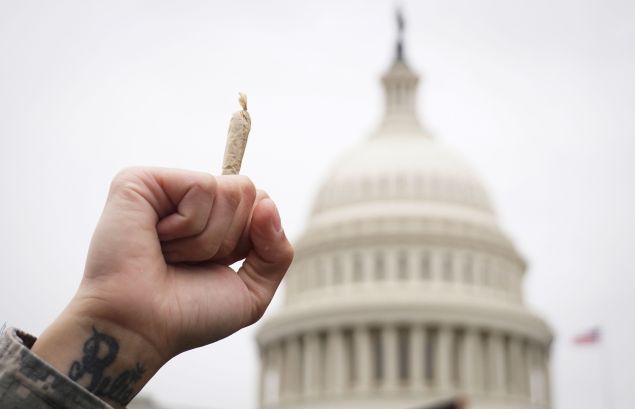 To say that it hasn’t happened anywhere else is hogwash. Only last year did Canada pass a historic bill for the legalization of recreational cannabis, becoming the first of the G7 countries to do so. In some U.S. states you’d be considered prude if you hadn’t tried marijuana, while no trip to the Netherlands is complete without a visit to their notorious “coffee” shops.

Regulated markets could really reap some huge benefits: we’d be spending billions more on the National Health Service, as well as on the police force – finally plugging some long-standing funding gaps, allowing us to tackle the big problems like knife crime. And as the Durham police constable said himself: “We cannot simply arrest our way out of drug problems.” It almost sounds like a win-win.

There will always be a stigma to drugs, but it’s important to realize that cannabis can most certainly be used to treat epilepsy and multiple sclerosis, and as users of the National Health Service, we should always be pushing for the best treatment possible. It must now be accepted that the tide is most definitely turning.

The inextinguishable student voice is beginning to be heard, and who knows, perhaps in the not so distant future, with the right politicians and tweets, there may be a dispensary opening near you.

Disclaimer: The views and opinions expressed here are those of the author and do not necessarily reflect the editorial position of The Globe Post.