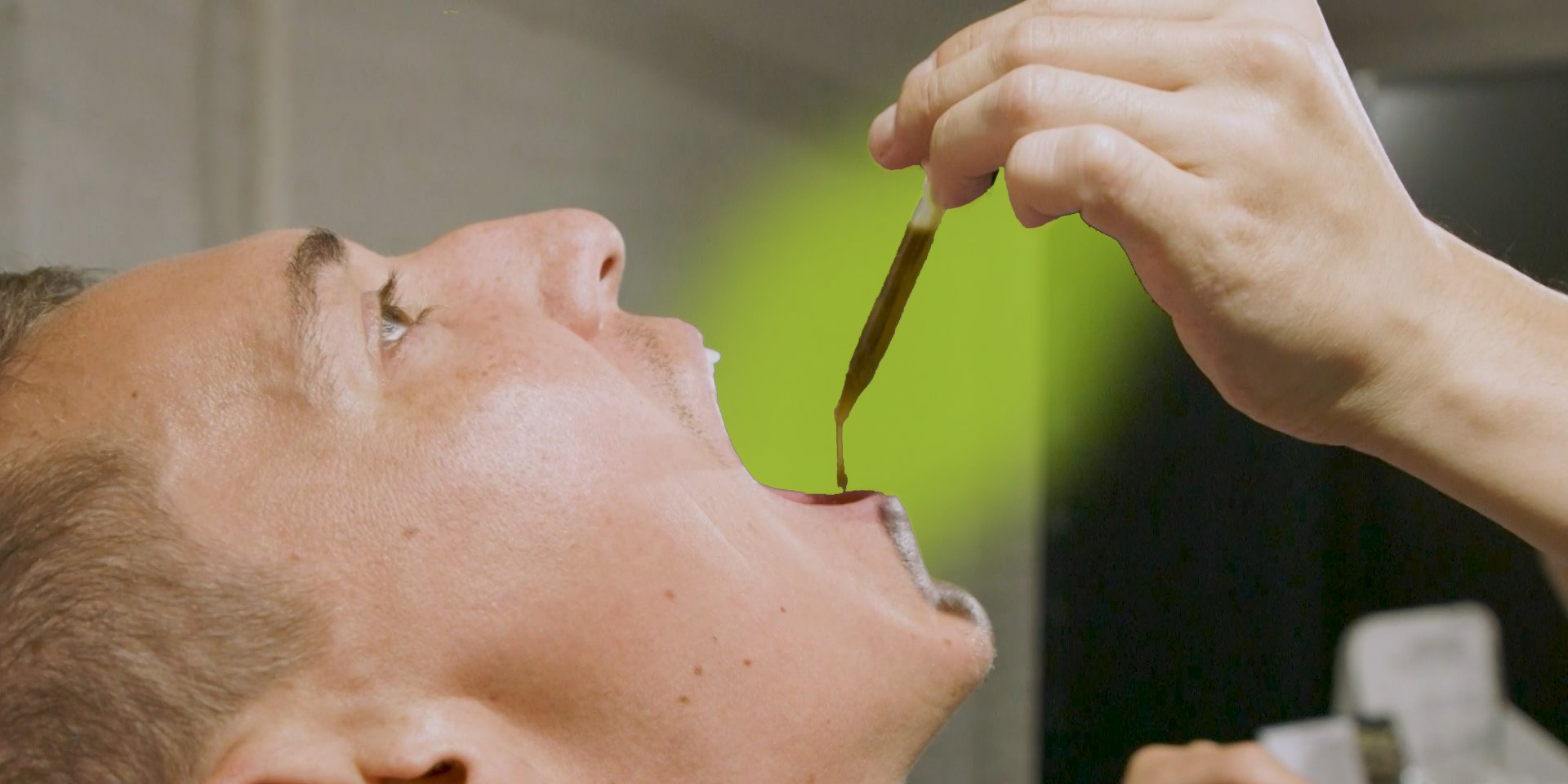 Following is a transcript of the video.

Steven Phan: You gotta lean back. No, tongue back!

Benji Jones: That’s me, trying CBD at a shop in New York City. Lately, I’ve seen this stuff everywhere: At the local health food store, but also at Urban Outfitters, Sephora, and CBD shops like this one. And if you look at some of the branding, it kind of makes sense.

CBD products claim to help with everything from anxiety to insomnia to muscle pain. It almost sounds too good to be true. And maybe it is. To find out, I set up a little experiment. For one week, I took CBD three times a day, while tracking my anxiety with a scorecard. I also chatted with an expert before and after to sort through the results. Here’s what I learned.

CBD is a distant cousin of THC, the psychoactive chemical in marijuana. They both come from the cannabis plant, but CBD isn’t psychoactive. Meaning it doesn’t get you high. Now, of course, getting high isn’t the only reason why cannabis is popular. People also use it to relieve pain, control seizures, and lessen anxiety. But as researchers like Dr. Yasmin Hurd are discovering, it’s likely CBD, not THC, that’s behind these benefits.

Dr. Hurd: „It can activate some serotonin receptors, and the serotonin system is associated with alleviating anxiety.”

Jones: Hurd has been studying the effects of CBD for over 10 years. And she’s found that it can reduce anxiety in people with a history of heroin addiction. Now, fortunately, I don’t have a history of addiction, but I do see a therapist for chronic anxiety. And CBD could still help.

Dr. Hurd: „Both under normal conditions and in people who have anxiety disorders, enough research has started to show that it does have an anti-anxiety effect.”

Jones: So, back at the shop, I tried all kinds of product. From sweets to lotions and sprays. And while Hurd couldn’t recommend a specific dose for me, she did say that 300 milligrams a day should be enough to feel something. Because participants in clinical trials typically take anywhere from 300 to 600 milligrams. So, those chocolates and sprays? They weren’t going to cut it. Instead, I went for something else.

Phan: The tinctures, right? This is where you really get into the higher-strength things.”

Jones: All right, today is the day! I have my CBD here. I’m kind of nervous. All right, here we go.

Now, mind you, this was a Wednesday. A workday. Side note: The reason I’m taking CBD this way is that there are tons of capillaries under your tongue. So, anything you put there can be absorbed directly into your bloodstream. Whereas when you ingest CBD, like with that chocolate, a lot of it is broken down by your stomach. Which means you probably won’t feel much.

Anyway, several hours later, I took my last dose of the day.

If anything, I just feel extremely tired.

That was the first thing I noticed: that CBD was making me drowsy. Really drowsy. Which Hurd said is a pretty normal side effect at high doses. Though we’re not exactly sure why. But as I discovered the next night, it’s also great for hangovers.

I had some alcohol, and I’m certainly not going to have trouble sleeping. I think I’m going to eat a slice of pizza.

The next morning, I felt…great. And according to Hurd, that’s because CBD also has some anti-inflammatory effects. But what about anxiety, what I was really in this for? Each morning, I filled out the anxiety scorecard that Hurd gave me. It was a rough estimate of my daily emotional state, based on numbered responses to statements like, „I feel at ease.” But day to day, it was harder to figure out whether CBD was helping.

Just walking home on Friday night after three days of CBD, and I’m reporting that I’m mostly just tired and feeling lethargic. Not in a bad way; it kind of feels like I have a warm blanket around me, so I don’t hate it.

But over the weekend, I finally got the relief I was looking for, even more quickly than I had expected.

So, I happened to take CBD right before I had to do something stressful. It’s Sunday, but I had a task that I was not looking forward to. And I took 100 milligrams, and I pretty quickly felt my nerves calming down. And I was like, OMG, this is totally working, which is really great because I’m looking for that quick relief like everyone is.

Not going to lie, I actually feel a little bit more calm. It kind of puts me into a dissociative state, where I’m slowing down a little bit. I actually get physical pain in my heart region when I’m anxious, which I know sounds terrible. But just 30 minutes after taking my 100-milligram dose for the evening, I feel an absence of that. I will say that I’ve also been listening to the „Lion King” soundtrack, so there are confounding variables. But yeah, I feel a lot better right now.

At that point, I had just one day left.

All right, I’m about to take my last dose of CBD! I must say, I’m kind of excited to stop having to take this three times a day. I think part of it is scheduling and remembering. But also, yeah, I’ve also just been so much more tired. I don’t feel like my anxiety was just washed away. I felt like there were a few times where it really helped in certain instances. And, overall, kind of lowered the intensity of how I was feeling because I felt lethargic. But yeah, I don’t want to be tired anymore.

Afterward, I looked over my anxiety scorecards. And sure enough, it showed that I was feeling slightly less anxious on my last day, compared to my first. Especially when I looked at statements like this. Yeah, that’s a big one for me. I wanted to run these results by Hurd.

Jones: Um, to be honest, I don’t feel that different. I think that the biggest change that I noticed is…I was just tired all the time. I feel this kind of slo-mo lethargia that makes me feel, like, a little bit disassociated with reality. And I think that is what made me feel a little less anxious at times.

Dr. Hurd: So, perhaps…taking it at night only might be best because it can make you a bit sleepy, and everyone has a different sensitivity. If you take it at night you get past the initial sedative effects… and then you don’t have to worry about taking other things like caffeine to try to stay awake.

Jones: And what about those moments of instant relief? Was that in my head, or could CBD act that fast?

Dr. Hurd: „Yeah, absolutely. It can act that quickly. For us, in our studies, people did — shortly after getting CBD — report reduced anxiety.”

Jones: But if there was one takeaway from our conversations, it was this:

Dr. Yasmin Hurd: Ironically, even though it’s now this huge fad in our society, we still don’t have a very good handle on how it’s working.

Jones: In other words, we don’t know: what size dose you should take, how, exactly, it changes your brain, or how it impacts different people in different ways. That’s because until late 2018, nearly all CBD was classified as an illegal substance. Which made it really difficult for scientists to study. And while research is starting to catch up… in some ways, it’s too late.

Dr. Hurd: It’s one of the first times in history that the public is determining whether something is medicine, not scientists and physicians.

Jones: As for me, will I continue using CBD? Yes — but likely only for those moments when I need instant relief. Because, while it seems to benefit a lot of people … I’m not yet fully convinced. But also because, this bottle? It costs more than $130! And if I’m going to spend that much, I want to be absolutely sure it works.