First they had dairy cows, and in the 1950s the farm switched to vegetables, like corn, watermelon, peppers and tomatoes, as well as their mainstay, strawberries.

But Weiss, who doesn’t mind a challenge and likes growing different produce – he has two quince trees – has a new crop on his strawberry fields: hemp.

Other farmers in the area are trying out the new crop, too, right across from their corn and squash fields.

The plants are 5 feet tall, and as big around and as green as a Christmas tree. Weiss farms 125 acres, and is growing hemp on 60 acres this year.

But New York State is hoping hemp, otherwise known as cannabis, will reinvigorate the agriculture industry. The state’s Industrial Hemp Research Pilot Program expanded in 2017 from educational institutions to include private farms and businesses. Last year nine farms in Western New York had permits to grow the plant. So far this year, there were 20 permits issued in Erie County, and nearly 500 statewide. 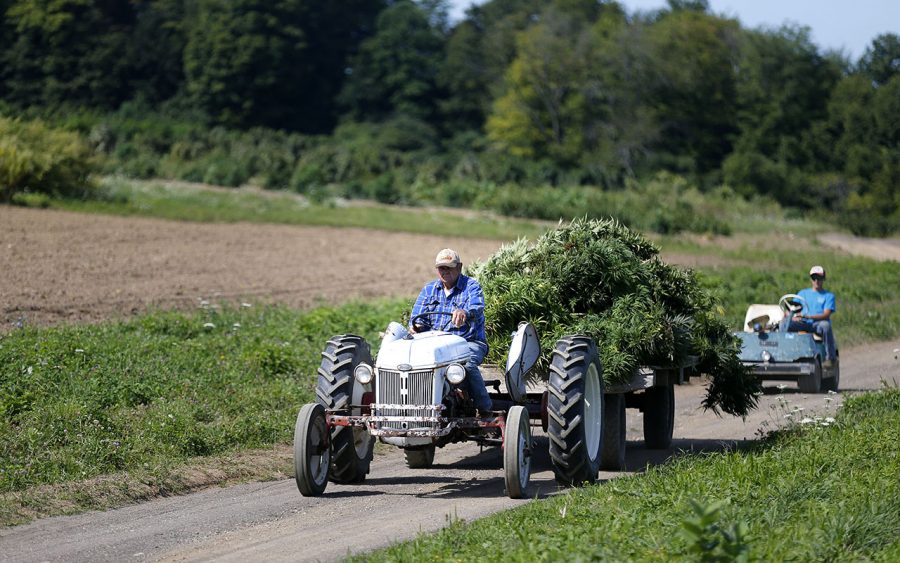 Tony Weiss rides a tractor of harvested hemp weed plants back to a greenhouse to dry at Weiss Farm in Eden on Saturday, Aug. 31, 2019. (Mark Mulville/Buffalo News)

„It does offer an opportunity for farms to diversify and seek new economic opportunities, especially in light of the downturn of the farming economy,” said New York Farm Bureau spokesman Steve Ammerman. „Diversification can be very important to farmers. It spreads the risk around, and provides new sources of income for their farm, which is especially important when times are tough.”

New York State keeps an eye on the cannabis farms, and inspects the industrial hemp plants before they are harvested to ensure the level of tetrahydrocannabinol, or THC, is no more than 0.3%. The low level of THC is what makes these plants different from the marijuana people smoke to get high.

The answer is in the signs at gas stations, barbershops, mini-marts and grocery stores for CBD oil, which comes from the hemp plant. The industry is generating a buzz with endorsements like the one from retired New England Patriots tight end Rob Gronkowski, who announced last week he is becoming an advocate for sports leagues to allow athletes to use CBD products for pain.

Most of the hemp in Western New York is harvested for cannabidiol, or CBD. It is used for a number of health reasons, including anxiety, pain and some epilepsy syndromes, according to Harvard Health Online. Hemp also can be used for its fiber, for textiles such as clothing, paper and building materials, according to Cornell University.

Mike Barnhart, the owner of Plant Science Laboratories on Wyoming Avenue, obtained one of the first permits in New York to grow and process hemp. He was intrigued with CBD when a family member in Oregon took it for anxiety and migraines.

He had been making nutritional products for 25 years. He has partnered with Weiss, Spoth Farms in Amherst and other farms. Barnhart said he met Weiss about 25 years ago at the Bidwell Market. The two are partners on the agricultural end of the business. 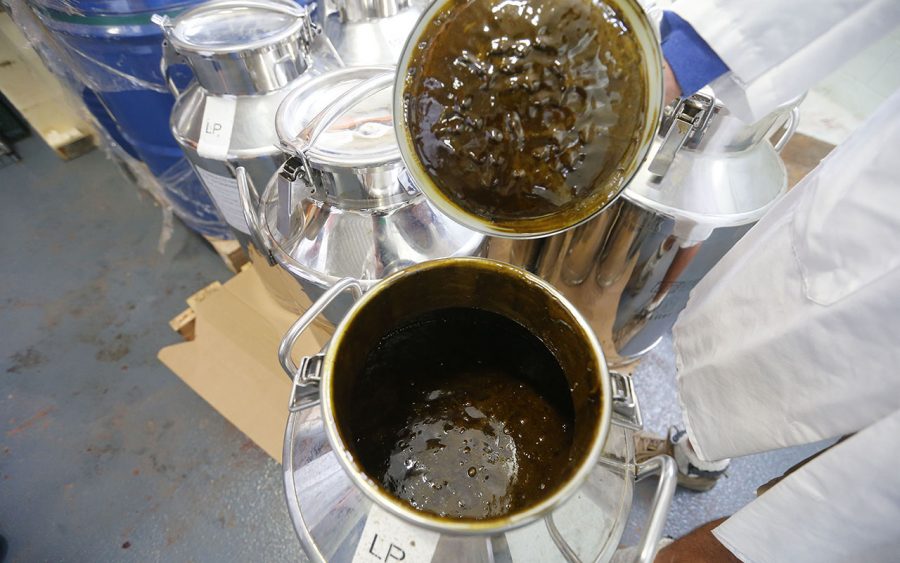 Mike Barnhart displays a cylinder of concentrated processed hemp that will be made into CBD products at Plant Science Laboratories. (Mark Mulville/Buffalo News)

They grew a quarter acre of hemp three years ago as part of the pilot program, and about 20 acres last year. The first year they „went through a lot of expense,” with trickle irrigation hoses under plastic, Weiss said.

„We found that wasn’t really necessary,” he said.

The next year, he planted 20 acres of hemp.

„There’s a lot of problems with it as far as planting. It’s a problem of getting the plants early enough in the spring,” he said.  „You want to plant them late May, early June. If you don’t do that, they don’t mature the way they should. You don’t get the full potential of the plant.”

He planted seeds in the greenhouse in March, but they were not ready to plant in the field until late June. Now he’s cloning plants, in hopes he does not have to buy as much seed next year. No pesticides were applied. Instead, millions of ladybugs were used to control aphids at the farm. 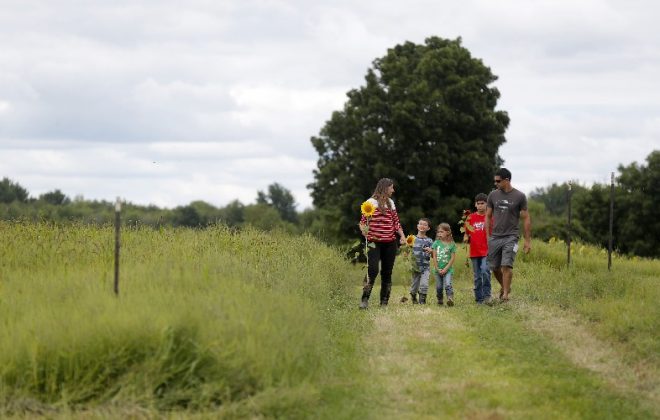 The Pinheiro family from left to right, Marisa, Nathan, Sarina, Lucas and Roger, walk by the hemp maze at the Farm in Peace farm in Collins on Aug. 24, 2019. (Mark Mulville/Buffalo News)

Christopher and Paula Jeanniton found out how particular hemp can be on their Farm in Peace farm in Collins.

„It is very weather-dependent,” Christopher Jeanniton said. „It did bad because of wet weather after we planted it. Our other field down the road is doing great.”

Weeds grew up among the hemp plants, so last month the couple created a „hemp weed maze” – pun intended, they said – with informational stops along the way. The farm hosts drum circles and yoga, and sells its produce at the farm shop, including hemp coffee and teas.

This is the second year they have grown hemp, doubling the amount to 18 acres.

„There’s still a lot of unknowns,” said Ammerman of the Farm Bureau. „It’s one thing to grow it, but it’s another thing to process it and market it.”

Barnhart, of Plant Sciences in Buffalo, said he has invested about $4 million in his processing facility for hemp, including $3 million on a supercritical carbon dioxide extraction unit. It went on line in June, and now he’s running three shifts to process the hemp.

Weiss is harvesting his hemp by hand, because the moist plants tend to gum up a traditional harvesting machine. It is hung upside down in the greenhouse to dry, and in about a week, the plants are ground up at Barnhart’s Romulus plant in the Finger Lakes.

The brown, crushed hemp is stuffed into a large canister, and sent into the extraction unit. After a three- to four-hour process, the result is a dark brown, thick, tar-like substance that is ready to be made into CBD products. The dry hemp that is left over is used for animal bedding, Barnhart said.

„My whole intention here is to bring a sense of legitimacy,” Barnhart said, „so that when you buy a New York-made CBD product, you know it meets the same kind of standard that you would expect when you walk into Rite Aid to buy bandages.”