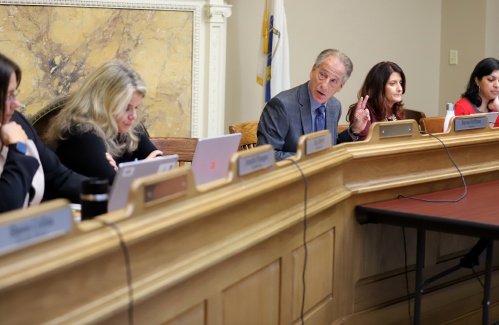 BOSTON — Home delivery of marijuana and the idea of establishments where adults could use marijuana together in a social setting cleared their final regulatory hurdles Tuesday, though it will be months or more until either activity gets underway in Massachusetts.

The Cannabis Control Commission approved its latest regulations for the medical marijuana world as well as the adult-use or recreational industry and addressed one of the more controversial parts of the new rules — the requirement that people delivering marijuana record the transactions on body cameras and retain that footage — with compromise language.

The requirement that drivers wear a body camera any time they are outside their delivery vehicle — which is also required to have cameras — and record all transactions caught significant flak at public hearings on the proposed regulations this summer, and commissioners have wrestled to find a balance between public safety and individual privacy rights.

“We depend on a good relationship with law enforcement. Our regulations, particularly our security regulations, reflect this,” Commissioner Britte McBride said Tuesday. She added, “Here, we are faced with the challenge of balancing public safety concerns like robberies, which the use of body cameras are intended to deter, with individual privacy.”

McBride and Commissioner Shaleen Title worked together to draft the new language, which McBride said “does not constrain law enforcement from responding to obtain video in emergency situations while also responding to constituencies we heard from that are apprehensive about infringement on their privacy.”

Under the regulations approved Tuesday, body camera video of delivery transactions will be stored for at least 30 days and must be made available to law enforcement under certain circumstances. Licensees will be prohibited from sharing video with “any third party not explicitly authorized by these regulations to have access to that video footage except that a licensee … shall make video footage available to a law enforcement officer acting in his or her official capacity pursuant to a validly issued court order or search warrant demonstrating probable cause.”

Title said the compromise language strikes a balance between the concerns that police have about marijuana delivery — vehicles loaded with marijuana and up to $10,000 cash could be prime targets for robberies — and the worry that video of a state-legal transaction could be used against a consumer.

“There are very heavy security requirements for all of our businesses … there are certain special concerns when you are delivering to consumers at home, so we talked about body cameras. There was some concern raised by law enforcement that because of the potential for robberies that we would need to have body cameras,” Title said.

“What we decided is that if we are going to have body cameras, that footage is going to be protected … no one will be able to go in and fish through that footage, and consumers should know that about their privacy.”

CCC Chairman Steven Hoffman pointed out that the commission has made “substantive changes” to its plan for home delivery and social consumption since it first contemplated authorizing those activities in 2017 based on conversations with law enforcement. When it was putting its first set of regulations in place, the CCC initially included allowances for delivery and social consumption, but put those on hold as the governor and others said they were moving too quickly.

The new recreational marijuana regulations were adopted with a handful of mostly minor changes by a 4-1 vote Tuesday, with Commissioner Jennifer Flanagan casting the lone dissenting vote.

“I don’t oppose the regulations — I think it’s too early for social consumption and delivery,” said Flanagan, a former state senator. “I think that in time it’s going to be appropriate to be in Massachusetts, but I think given, right now, two years after we began this agency, one year after we started licensing, it’s early to do that.”

The CCC also approved a new set of regulations for the medical marijuana industry by a unanimous vote Tuesday.

Hoffman said it will take some time for the CCC to develop an application for delivery licenses and to begin approving those licenses.

“I think delivery is still going to take a while,” he said. “But you’ll see more action sooner on delivery than you will on social consumption.”

The new CCC regulations authorize a pilot program for on-site consumption, but Hoffman said state lawmakers have to act before it can launch. Legislation to facilitate the pilot has been filed and is pending before the Committee on Cannabis Policy.

“It’s going to take a while for social consumption,” Hoffman said.