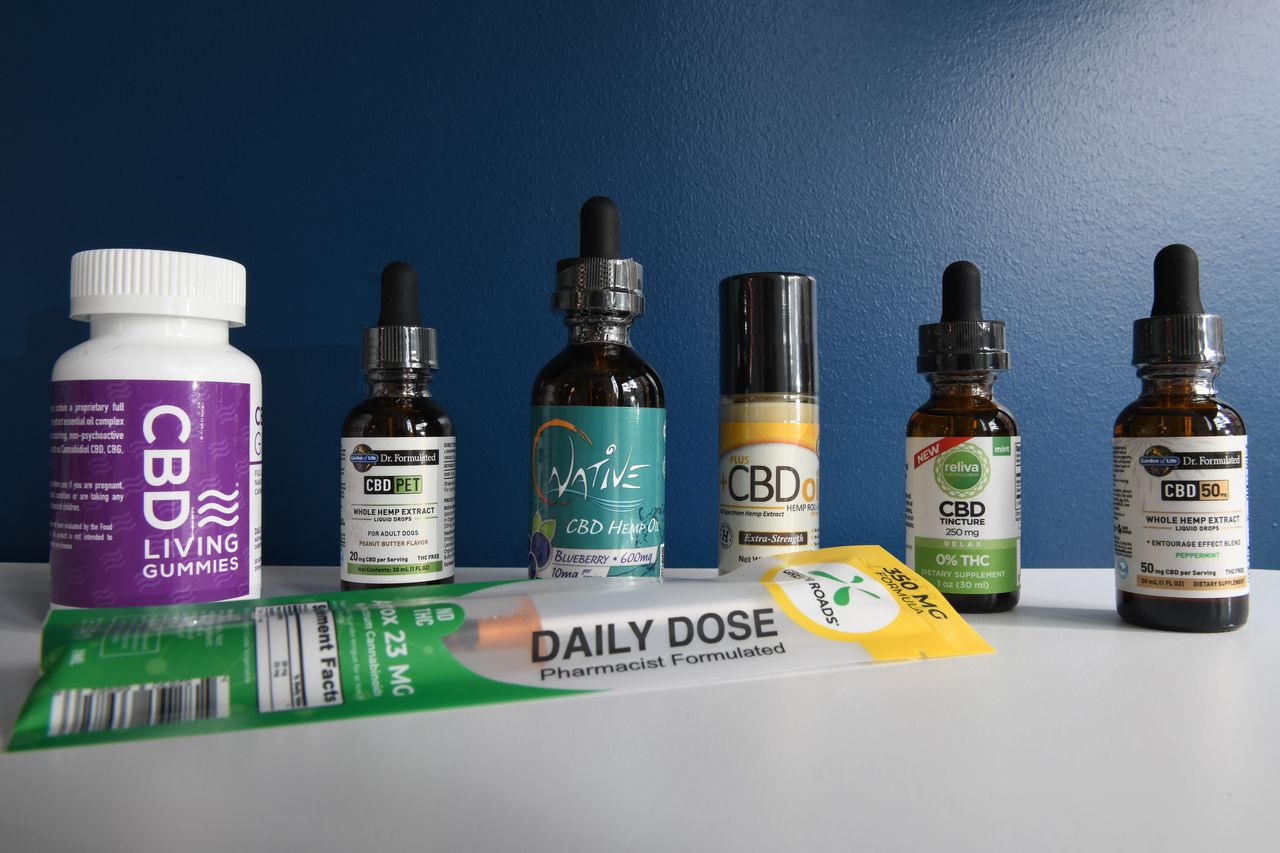 An explosion of unregulated CBD-infused products in grocery store aisles and video rental store shelves in Michigan and across the country is exposing consumers to the “Wild Wild West” of nutraceuticals.

An MLive investigation into the most commercially available CBD products found that most in Michigan are true to their labels – although experts warn that isn’t always the case.

“CBD is in a little bit of a popularity bubble,” said Dave Crocker, who runs Michigan Holistic Health in Kalamazoo and has a line of cannabis products called Solutions by Dr. Dave. “I think people that have questionable motivation have come into the industry.”

CBD, or cannabidiol, is a hemp-derived extract that can be added to oils and lotions and is used as a natural remedy for anxiety, insomnia, depression and pain. It’s legal in the U.S. as a result of the 2018 Farm Bill that legalized hemp — but there have been no regulations or standards issued for the product. That’s not to say CBD doesn’t have medical benefits: last year the FDA approved the first CBD pharmaceutical product to treat severe forms of epilepsy.

Mainstream America is embracing CBD in a big way — the products can be found in Kroger and Family Video to gas stations, hair salons and baby boutiques.

Despite a lack of science and regulations on CBD, people are trying it. And they’re liking it.

“I had the wow factor,” said 49-year-old Tammy Yarbrough about her first experience with CBD.

The Coloma grandmother now sells CBD products out of her home.

Yarbrough has suffered from Post Traumatic Stress Disorder since she was a teenager, and tried to cope with her anxiety and sadness with “Big Pharma.” It didn’t work.

A year and a half ago she tested out CBD oil. She bought it for her husband, who was recovering for an injury. She was skeptical it would help.

“Within the first day and night, I slept the entire night through,” Yarbrough said.

CBD is derived from hemp cannabis, which contains trace amounts of THC or tetrahydrocannabinol — the psychoactive chemical that gets users high. CBD faces no testing requirements or standard production practices.

In the absence of rules, some companies are making claims that their CBD products treat cancer, Alzheimer’s disease and opioid withdrawal — claims that have caused the FDA to issue warnings.

“There’s really no question about whether or not there’s medicinal properties to be found in the derivatives of CBD and in CBD itself,” said Dr. Cara Poland, medical director of addiction medicine at Spectrum Health and an assistant professor at Michigan State University. “That’s not up for question anymore — we can start the conversation knowing there are medicinal purposes to CBD, but we don’t know that the extent of that is.”

MLive investigated some of the most readily available CBD products on the market today in Michigan.

Seven CBD products were purchased by MLive and then submitted to the state-licensed medical marijuana testing lab PSI Laboratories in Ann Arbor for testing. Technicians there evaluated the products to see what cannabinoids they contained, how strong the cannabinoid concentration was, and if they contained any harmful pesticides.

Search the database below to see how the products fared in the independent lab testing.

One such product that tested lower was Green Roads CBD oil product, which advertised a 23 mg dose of CBD in a 1 mL syringe. The company’s lab results indicated there was 16.1 mg/g of CBD in the product; the PSI Laboratories test showed 7.3 mg/g of CBD. The product was purchased at Pipe Dreams Tobacco.

Green Roads disputed the results, saying in a statement: “We vehemently dispute these lab results, which conflict with the multiple tests conducted on Green Roads products by the largest cannabis and hemp testing company in the US. The discrepancy between the lab results is likely due to interlaboratory variance which can occur for many reasons and not due to the product itself. Green Roads has been a CBD industry pioneer in self-regulation, consumer education, and transparency, and has championed for industry regulation and standardization. We thoroughly stand by our products and the integrity of the Green Roads independent lab results that are available to consumers via QR codes on all of our product packaging.”

“By and large there are a lot of available ones at some of the bigger vendors — I think they do a good job of trying to vet these things before they put them out there,” Spivak-Birndorf said, explaining that there are plenty of bad actors in the market as well. “We’ve definitely seen some pretty bad ones — and many things that contain zero cannabinoids at all — far below the labeled dose by an order of magnitude.”

“The test results you provided fall within our standard manufacturing variances that we allow for. As a rule, we manufacture our product with a slightly higher (2%) amount of CBD than is required for a production run to account for mixing variances due to the viscosity of the products,” Natural Native said in a statement. “Our products undergo extensive testing at all stages of production to ensure that each has at least the stated amount of CBD on the label and that it is free from THC, residual solvents, pesticides and heavy metals. These tests are easily accessible for the consumer by scanning the QR code on each bottle.”

Many companies put QR codes on their bottles that link to their own lab test results to assure consumers the product is what the label says.

One of the products purchased in the MLive investigation — Reliva — did not include a QR code. The product was labeled at a 250 mg formula, and the PSI Laboratories test result indicated there was 238 mg of CBD. Shane Hoffman, chief science officer for Reliva, said the company is actively working to decrease that margin of error by adding more active ingredient to the formula. The company has also recently added QR codes to its labels linking to its own test results, Hoffman said.

“In this current climate without clear and direct guidance from the FDA, we’re redefining all of our protocols to be as safe as possible for our consumer,” Hoffman said.

MLive reached out to all companies whose products were tested – Green Roads, Natural Natives and Reliva were the only companies to respond to request for comment.

Many point to the source of CBD’s trending status to October 2018 when CNN’s medical expert Dr. Sanjay Gupta appeared on the Dr. Oz television show. The topic: CBD.

While cautioning consumers about the unregulated market and proliferation of products, Gupta said he’s heard from too many people about the positive impact of CBD on their medical issues.

“I think that there’s a legitimate medicine in here — I think we’re talking about something that could actually really help people,” Gupta said.

“In a sense it was an overnight phenomenon,” said Aaron Hatfield, a hemp grower and farmer who works with Solutions by Dr. Dave in Kalamazoo.

As products like CBD lotion and CBD gummy bears hit store shelves in Michigan this spring, the FDA was holding hearings to determine how it should regulate CBD. Rulings are expected within the year.

Doctors are urging consumers to be cautious as they make their decisions.

“I think the potential is absolutely there,” said Dr. Mark Hamed, director of the Departments of Emergency and Hospitalist Medicine at McKenzie Health System in Sandusky, of CBD’s medicinal promise.

The over-marketing and proliferation of CBD-infused products like soaps, lotions, shampoos and lip balms minimizes the importance of CBD’s benefits, Hamed said.

“My biggest concern with products on the market today: 80 percent don’t have the concentration that they say they do — this is true of all nutraceuticals,” Poland said. “Just be very cautious. Just like you would want to get a vitamin from a reputable source, you want to do the same thing with CBD oil or CBD products.”

Poland said she can’t recommend CBD products to her addiction patients because their use has not yet been widely studied and proven to be as effective as traditional medication. However, in Hamed’s practice as a family physician, he advises his patients to keep him apprised if they decide to test out CBD for themselves.

The federal government has acknowledged the medical benefits of CBD, though the clinical research is just beginning.

In June 2018 the FDA announced it had given its first approval to a cannabis-derived drug: Epidiolex, which is a CBD oral solution used to treat seizures associated with two rare and severe forms of epilepsy. Epidiolex requires a prescription.

„Because of the adequate and well-controlled clinical studies that supported this approval, prescribers can have confidence in the drug’s uniform strength and consistent delivery that support appropriate dosing needed for treating patients with these complex and serious epilepsy syndromes,” FDA Commissioner Dr. Scott Gottlieb said in a statement at the time. „But, at the same time, we are prepared to take action when we see the illegal marketing of CBD-containing products with serious, unproven medical claims. Marketing unapproved products, with uncertain dosages and formulations can keep patients from accessing appropriate, recognized therapies to treat serious and even fatal diseases.”

The FDA has not approved any other CBD products other than Epidiolex.

This June the FDA cracked down on CuraLeaf, a Massachusetts-based company, for advertising “unsubstantiated claims” that its CBD products treat cancer, Alzheimer’s disease, opioid withdrawal, pain and pet anxiety.

As consumers navigate the CBD waters alone, it’s important to understand the secret code behind product labeling. That’s because some cannabis-extracted oils can contain THC — and that can cause individuals to fail a drug test.

“It can be hard to tell because of the lack of regulation,” Spivak-Birndorf said. “It comes out of the packaging, and your own intuition — is this a good place to buy this from? Does it seem legitimate?”

Consumers should also be aware of the risks and benefits associated with trying a higher concentrated CBD oil.

“With a higher concentration like that you can lower the amount of carrier oil that you’re actually eating. That stuff can be healthy but at some point — maybe not so much if you’re finding you’re taking too much of a raw oil and gives you an upset stomach,” Spivak-Birndorf said. “If you have too many gummy bears in a day it can make you feel unhealthy.”

There also could be a risk that CBD can interfere with other drugs.

Hamed said CBD is metabolized by the liver — and anyone on medication should talk to their doctor before adding CBD to their regimen to make sure it doesn’t conflict.