Marijuana stocks have not been a successful asset class in 2019, to put it gently. While most of them sailed through last week, trading flat or only slightly down, over the year they’ve generally seen their values deteriorate considerably. Structural weaknesses across the industry, mixed with a variety of other factors including company-specific problems, have largely been the culprit.

Yet certain impediments to the cannabis market’s success are falling away, if only gradually. One of those dominoes was toppled last week, the major cannabis industry development in a five-day period that was generally light on news in the pot sector. Let’s get into it. 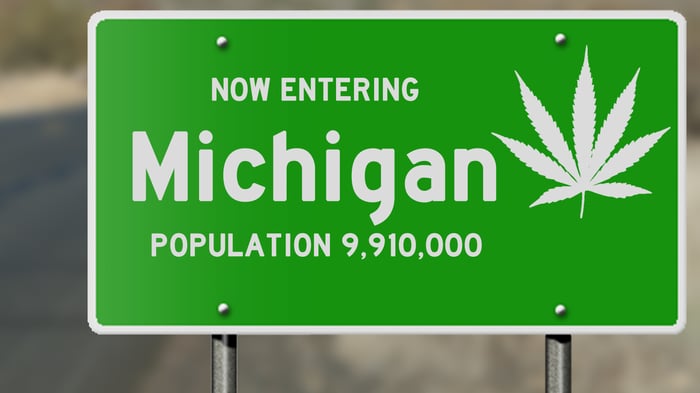 Michigan’s got ’em, and is smoking ’em

Slide another one into the legalized recreational cannabis column. On Dec. 1, Michigan became the latest state to permit the sale of recreational marijuana, over a year after its citizens voted in favor in a public referendum. It’s the first Midwestern state to green-light this form of sale and consumption.

This is obviously good news for the broader cannabis industry, as a recent estimate pegs the Michigan casual weed market to be worth anywhere from $1.4 billion to $1.7 billion in annual sales within a few years.

But let’s not consider it a big win just yet.

According to media reports, a grand total of three privately owned dispensaries were open for business on launch day. All are located in the city of Ann Arbor, so fans of the green in places like Detroit, Lansing, and Kalamazoo are out of luck. Unless, of course, they don’t mind a long commute to purchase weed, or are happy continuing to buy product illicitly.

There is obvious and clear demand for recreational cannabis in Michigan. Marijuana Business Daily quoted the owner of one of the stores, Exclusive Brands, as saying his store served over 900 customers on day one alone. Around 250 more people waiting for service had to be turned away (although all received vouchers allowing them to advance to the front of the line the following day).

With this very small start, in spite of the obvious consumer hunger, it might take some time before the Michigan market has any impact at all on the publicly traded cannabis companies. That $1.4 billion-plus in sales seems very distant.

But that’s almost beside the point — marijuana continues to make huge strides toward legitimization, and there’s every reason to think the momentum will continue. Meanwhile, the No. 2 Midwest recreational market, Illinois, will go live on New Year’s Day. Once that occurs, the count of states allowing recreational sales will reach 11.

Though advancements in the recreational segment are welcome, medical cannabis remains a more high-margin product. This is why many marijuana companies devote capital and resources to developing it.

One that’s doing so is Aurora Cannabis (NYSE:ACB), which announced last week it secured a crucial license to sell such wares in Ireland. The country recently made medical cannabis legal, sort of — it’s liberalizing it in a five-year pilot program that has significant restrictions. One of these is that patients can be prescribed medical weed only if they suffer from one of three conditions.

Aurora said the license covers its High CBD Oil Drops product. This is the second license awarded for medical marijuana supply in Ireland.

This doesn’t really move the needle in either direction on Aurora’s stock. Yet it does indicate that the company’s hope to be a global medical weed supplier has some basis in reality. If the Irish experiment succeeds during that five-year test flight, perhaps it’ll be followed by a relatively quick liberalization of other European medical and even recreational cannabis segments, which would further play into Aurora’s international ambitions.

A healthy deal for Aleafia Health

Aleafia will provide this entity with 2,840 kilos of cannabis flower in up to three shipments, which are to be completed by the end of January 2020. At a price per gram of 2.50 Canadian dollars ($1.89), the deal stands to bring in gross revenue of CA$7.1 million ($5.4 million). Aleafia’s counterparty will slap its own brand on the product.

No, that dollar figure isn’t immense. If we glance at the revenue lines of top marijuana stocks, we see much higher numbers. Aurora, for example, brought in CA$75 million ($57 million) in net revenue in its latest reported quarter. However, Aleafia’s most recent quarterly top line was CA$5.3 million ($4.0 million), so this latest arrangement is more lucrative than that.

Aleafia delivered its first net profit in the quarter. So if it can rope in even just a few more white-label clients, it stands a chance at staying in the black. Perhaps it can even start generating a bottom-line profitability streak. This would distinguish it from the rest of the publicly traded cannabis pack, which has frequently and habitually posted losses. Aleafia, then, is well worth keeping an eye on for investors interested in marijuana stocks.