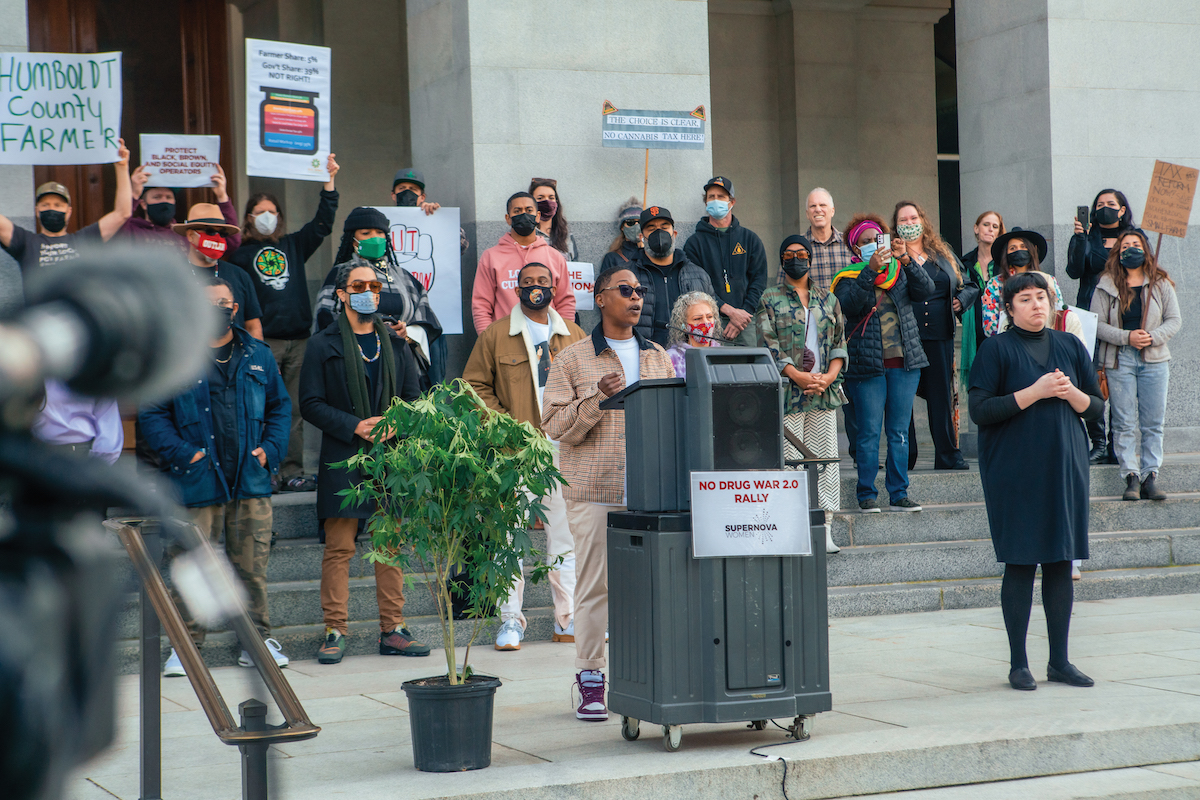 If California’s government had set out to create the worst possible conditions for the legal-cannabis industry, it couldn’t have done much better—or worse, really—than it has done through a series of lurches and stumbles since voters legalized weed for adult use in 2016. The industry is overtaxed, overregulated and underserved by its government. It is under threat both from the illicit market that dwarfs it and, sometimes, by bands of criminal marauders who periodically rob, burgle and vandalize cannabis businesses in Oakland and elsewhere. Meanwhile, wholesale prices are plummeting, putting small growers at risk of losing their livelihoods.

Cannabis entrepreneurs have had enough. They say that if the state government doesn’t deal seriously with the situation this year, the industry will collapse. The worry is that small and independent operators, already fleeing the industry, could vanish almost entirely, ultimately leaving the industry in the hands of a few big, rapacious companies.

Unless drastic action is taken, “Fifty to 60% percent of us will not make it to the end of this year,” said John Casali of Huckleberry Hill Farms, whose family has been growing cannabis in Humboldt County since the 1970s.

Casali issued his warning during a rally held last week outside the State Capitol in Sacramento. The rally was organized by Supernova Women, an Oakland-based group that represents businesses owned by Black and Brown women and those that participate in the state’s equity program, and by the Origins Council, a Ukiah-based group that represents the interests of small growers and what it calls “legacy farmers”—those who were growing pot when it was still illegal and who now want to be part of the legal market.

The state’s cannabis policy is so hostile to the industry that it amounts to a continuation of the War on Drugs, said rally speaker Kika Keith, owner of Gorilla Rx, the first dispensary in Los Angeles to be owned by a Black woman. She singled out Gov. Gavin Newsom, who often cited social justice as a reason for his support of Prop. 64, which, when passed by voters in 2016, legalized cannabis for adult use in California. “Gov. Newsom is why we stand here today,” she said. His promotion of social justice in legal cannabis amounted to “empty promises.”

It’s difficult to argue that the state’s cannabis policy has been anything other than an abysmal failure. Newsom last week declared that he is committed to reforming the state’s cannabis-tax regime, though he was short on specifics. “It is my goal to look at tax policy to stabilize markets,” he said.

Oddly, part of the reason for the state’s policy failures might also be part of the reason why the industry didn’t implode two years ago, when there were massive layoffs and business failures: the Covid-19 pandemic. The state government appeared poised in the spring of 2020 to take on tax relief and some of the other problems plaguing the industry, but the pandemic put most of those proposals on hold. At the same time, however, after cannabis was declared an “essential” industry, sales spiked and many companies reorganized and slimmed down. Conditions didn’t get much better, but it appeared that the industry was drawn back from the abyss just in time.
But things are bad again, and in some ways much worse, thanks in no small part to plummeting wholesale prices and increased criminal assaults on pot businesses across the state but especially in Oakland, Berkeley and other Bay Area locales.

Prices at the farm gate have fallen over the past year by anywhere from 30% to more than 50%, depending on locale and variety.

Some of the reasons for the price plummet have to do with government policy, and some are just a function of supply and demand, but pretty much the whole industry, from small growers and equity companies to firms owned and managed by wheeler-dealer VC-bro types, agrees that the state government is making the situation much, much worse than it otherwise would be, via the cultivation tax.

“No other agricultural crop in the United States is levied with a cultivation tax,” Genine Coleman, executive director of the Origins Council, told rally-goers. “Only cannabis.”

The problem is not just that cannabis is taxed at the farm gate, it’s the way the tax is structured: based on weight, not on the sale price. So, when the wholesale price of pot falls, the effective tax rate climbs. But even that doesn’t tell the whole story: cannabis is taxed by weighing whole plants, but as Casali noted, most of the plant doesn’t even make it into products or onto store shelves. “Twenty to 30% of the plant is all that’s used,” he said. But all of it is taxed.

Furthermore, the per-ounce tax rate has risen several times since legalization was passed. This month, it went up yet again, another 4.5%. The dry-weight tax is now $10.08 per ounce, or more than $160 a pound. In some cases, the tax represents about half the wholesale price of weed. For growers dealing with already-thin margins, that’s not sustainable. They are losing money. The cultivation tax is “extremely bad policy” Coleman said.

“The political will is there” to eliminate the tax, Coleman said in an interview after the rally. One problem, she said, is that it’s baked into the state’s cannabis law, which was approved by voters, and it’s not a simple matter of the Legislature voting to remove it.

The tax does grave harm to small growers, and gives a huge advantage to large operators who can more easily absorb the costs—though, to be fair, the large operators also generally favor eliminating the tax. At the same time, though state law forbids a licensed grower from cultivating on more than one acre until the cap is lifted next year, large operators have simply acquired more small-operator licenses and “stacked them to create major operations,” Christopher Jones recently wrote in the trade magazine MG Retailer. “Somehow, the state forgot to impose any limitation on the number of small licenses a single company could acquire. Oops.”

Small farmers are forced to compete with large growers “who are doing massive grows and doing them incorrectly,” said rally speaker Chaney Turner, chairman of the Oakland Cannabis Regulatory Commission and founder of Beyond Equity, which advocates on behalf of equity-owned cannabis businesses. A concentrated pot industry would lead to less consumer choice and substandard products, she noted. Worse, by pursuing policies that benefit those big players and drive smaller, independent operators out of the market, the state is engaging in “a second War on Drugs,” she said. A lot of those small operators are people of color, who were promised that legalization would give them a leg up. She noted that, nationally, “eighty percent of cannabis businesses are owned by white males.” A recent Business Insider article found that, among the 14 biggest pot companies—several of which are located in California—more than 90% of top executives are white dudes. This isn’t what “equity” was supposed to look like.

“War On Drugs 2.0” was actually the title given for last week’s rally. “We’re here today because the craft cannabis industry and social-equity businesses in California are in crisis and on the brink of collapse,” said Amber Senter, in opening the proceedings. Senter is a co-founder and executive director of Supernova Women, manager of the EquityHouse Incubator and CEO of the Oakland-based cannabis brand Maker House.

Senter’s own business was targeted by criminals during the crime spree on the weekend before Thanksgiving, during which dozens of pot companies in and around Oakland were hit, resulting in an estimated $5 million in losses.

For her, those crimes are part of the same problem as the government’s woeful tax and regulation policies. Police response to crimes against cannabis operators is inadequate, she said, and the policies of both state and local governments leave many operators unable to adequately defend themselves or make up for the losses they suffer. In an earlier rally after the spree, she called on Oakland to, among other things, eliminate its cannabis sales tax and provide assistance to operators to improve security.

“When we suffer losses like this,” she said at last week’s rally, “in addition to the increasing onerous taxes, we don’t have the runway to recover. Our social equity retailers are in desperate need of relief.”

When the cultivation tax, the 15% state excise tax, local cannabis taxes and regular sales taxes are added together, it yields an effective total tax rate on sales that can be greater than 50%. That explains why so many consumers are sticking with the illicit market—which often is represented by the guy down the street who grows weed in his garage, as opposed to some nefarious band of organized criminals, though those exist, too. Despite the fact that Californians overwhelmingly say they would prefer to buy pot from a licensed dispensary, some studies have shown that a price difference of just 10% is enough to convince them to stick to their illicit sources. Thanks to the tax rates, the price difference is far greater than 10%, which is why the illicit market still dwarfs the legal one. About three quarters of California’s weed consumers buy from the illicit market.

Eliminating the excise tax only for equity operators, as Senter and the other rally participants are demanding, might be a tough sell in Sacramento. It’s also bound to draw blowback from some non-equity businesses and their political lobbyists. “I don’t think they’ll be happy,” Senter said in an interview. But given conditions, she said, equity businesses “need an advantage” in the market if they hope to compete.

The California Cannabis Business Association has members from across the industry, and, not surprisingly, has not taken an official stand on eliminating the excise tax for some businesses but not for others. However, the lobbyist group has called for a reduction in the excise tax for all businesses, and is fully onboard with eliminating the cultivation tax altogether, said Amy Jenkins, the CCIA’s senior policy director. “The current situation is affecting all operators, large and small,” she said. “The CCIA and operators are all in alignment that the elimination of the cultivation tax is absolutely critical to the legal cannabis industry.”

Another big problem for California’s pot business is the fact that most local jurisdictions have opted not to allow cannabis businesses in their communities, leaving most California consumers without easy access to a dispensary. That’s thanks to California’s “home rule” policies, which can’t easily be countered by state law or policy. The industry won a major victory when the state government last year legalized cannabis delivery throughout the state, regardless of local laws. But that’s not nearly enough to solve the problem. Newsom has pledged to allocate money to fund grants to help local governments understand the benefits of allowing weed sales, and how to regulate them, a promise that Jenkins called “very encouraging.”

It’s always impossible to guess what the state Legislature might do, but advocates say that if it’s going to address these problems, it will have to be this year, or the industry will implode, to be taken over by Big Weed. “We were deemed essential early in this pandemic,” Senter said. “Where’s our essential relief and our essential aid? Our industry and our businesses are worth saving.”