A growing number of marijuana companies are betting that the cannabis plant will someday be obsolete. These startups predict powerful compounds called cannabinoids—such as THC, responsible for the “high” in marijuana—can be produced cheaper using bioengineered fungus rather than the traditional herb.

It’s not difficult to insert enzymes into brewer’s yeast so that it yields something like THC or CBD, the non-intoxicating cannabis-derived chemical swept up in America’s latest wellness trend. The growing list of companies investing in this tech include Ginkgo Bioworks (partnered with Cronos Group), Amyris Inc., and Hyasynth Bio. In 2017, Teewinot Life Sciences raised $12.3 million in Series B funding for cannabinoids derived from yeast or a strain of E. coli. And in June, Willow Biosciences inked an exclusive deal to make yeast-derived CBD for Noramco, a division of SK Capital. Just two weeks later, biotech corporation Intrexon licensed their proprietary yeast fermentation platform to the cannabis company Surterra Wellness for $100 million.

“A lot of people say, ‘This is crazy, [don’t] synthesize these chemicals, let nature do it,’” Jason Poulos, CEO of Librede, the first company to patent a cannabinoid production process from sugar-fed yeast, said. “And I want to thank nature for what it’s done, but I want to do it even better.”

Growing cannabis can be expensive, but it can also put a lot of strain on the environment. Yeast-derived cannabinoids promise to require less energy and water and require less land usage.

“There’s no fertilizers, there’s no pesticides,” Poulos said, adding it just takes sugar and water. “We would use some solvents, just like the cannabis industry uses for extraction. But because it’s all a closed-loop system, it can be recycled.”

But that doesn’t mean yeast has no carbon footprint—Ethan Russo, director of research at the International Cannabis and Cannabinoids Institute, says organic cannabis farming may still be more competitive. “It’s environmentally taxing to grow cannabis inside, but really, that’s a byproduct of prohibition,” he said.

It will take time for the promise of lab-grown cannabinoids to deliver, with many estimates pegged at two to three years from now. But there are nearly 400 pharmaceuticals that are grown from microorganisms, including insulin and the hepatitis b vaccine Recombivax. The question isn’t whether fermented cannabinoids can be done—it’s whether they should be done.

“They’re gonna have one organism that can make multiple cannabinoids and terpenoids? I don’t think so. If any of these companies are thinking about pharmaceutical development, the product is going to have to come from one species,” Russo said, which isn’t yet possible. These yeasts can only produce a few specific cannabinoids at a time. “Otherwise, it’s a combination product and it vastly complicates the regulatory process.”

“The plant does it better,” Russo wrote in Frontiers in Plant Science, a month before scientists at Demetrix announced that they’d modified Saccharomyces cerevisiae, commonly called “baker’s yeast,” to produce numerous cannabinoids. They were also able to produce “unnatural” cannabinoids, which do not exist in nature, and could have undiscovered therapeutic potential. However, there is next-to-no research on these compounds yet, and the road to FDA approval for a new drug can cost between $2 to $3 billion.

“It’s really fascinating what they did, and it is a scientific accomplishment, but I think the practical result is minimal,” Russo says. “If you look closely, the concentrations of the material that they’ve been able to produce are really tiny.”

The cost is not likely to drop soon, Russo said, pointing out that even if a yeast could produce higher amounts of cannabinoids, the concentrations could be toxic to the fungi. “They can bioengineer up the wazoo, but I just don’t see it being competitive with a field of Cannabis sativa,” he said. 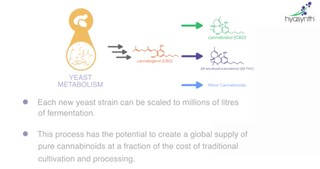 Ronan Levy, chief strategic officer at Trait Biosciences in Toronto, agrees. “Everything you can do in yeast, you can do in the plant itself with far greater yield and purity,” he told Nature. With the rapid growth of the hemp industry, coupled with improved extraction technology, the cost of CBD isolate could drop significantly in the future. It’s not clear if biosynthetic cannabinoids can keep up with demand as the cannabis industry booms.

Nonetheless, Poulos is aiming to produce yeasty cannabinoids that cost $200 a kilogram. By comparison, John Cummings, CEO of Hemptown in Vancouver, said the company is currently selling plant-derived CBD crude and isolate for between $3000 and $4000 per kilogram retail.

“CBD prices will see volatility and most likely increase over the next two years while farm operations try to optimize and catch up with increasing consumer demand,” Cummings wrote in an email.

Librede’s various yeasts can make almost any marijuana compound you can dream of—but so far, the company has only been able to generate one that’s cost effective: cannabigerol, or CBG. The science on CBG is scarce, but there’s some evidence it is therapeutic for inflammatory bowel disease and glaucoma.

CBG is not well known, even among people familiar with CBD and THC, but Cummings and Poulos are both betting the market for CBG is set to pop off, as consumers become savvier to “minor” cannabinoids. In the meantime, Librede is racing to develop cheaper biosynthesis of other cannabinoids that can compare with the cost of growing marijuana. For other more desirable compounds, Russo thinks it makes more economic sense to stick to plants.

Troy Farah is an independent journalist from Southwest California. His reporting on drug policy and science has appeared in WIRED, The Guardian, Undark, Discover Magazine, VICE and more. He co-hosts the drug policy podcast Narcotica. Follow him on Twitter .