Legalising cannabis can have major benefits for all citizens. If carried out correctly, everyone will benefit from less crime and stronger rule of law. Legalising the drug will especially help protect young people and may even lower their consumption of the drug. It is also a way of raising taxes for the state, instead of fuelling criminal organisations, which currently control the illegal market.

These benefits are increasingly recognised by the public. Crucial to seeing these benefits come about, is the way legalising cannabis is done and how the drug is priced once it is made legal. These are the findings from research I’ve carried out with colleagues in France. There must be a combination of getting the price level right and cracking down on illegal activities to reach the right balance between reducing criminality and avoiding increases in cannabis consumption following legalisation.

Read more: Millions use cannabis, but figures for how many become dependent aren’t reliable

To fight the black market, the price of legal cannabis has to be relatively low. For example, it could be set around or slightly below the current illegal price. This will attract current users of the drug away from their existing dealers.

But if nothing else is done, this will not be enough to eradicate the black market. Dealers will simply lower their prices to attract customers back. They are able to do this because there is currently a high markup in the illegal market.

There is a large range of prices and cannabis products sold illegally but the average price of high-quality cannabis is roughly US$300 per ounce in London, according to the crowd-sourced website priceofweed.com. This is up to three times as high as production costs based on evidence from the US market.

The increased competition that the legal market would bring would likely substantially increase consumption – not something most policy makers want. So as well as implementing a legal market, there needs to be a mix of policies to control consumption, including sanctions that are enforced against illegal activities. This would allow a government to price out dealers, while keeping the price of legal cannabis relatively high.

The reasoning is simple: if production or distribution costs of illegal cannabis increase, it is easier to drive criminals out of business by selling legal cannabis. My research shows that the harsher the punishments you put in place against people selling cannabis illegally, the higher you can set the price of legal cannabis to price out dealers. We call this the “eviction price”.

Other instruments governments can use to increase the eviction price are to deter consumers from buying illegal cannabis through enforced sanctions or warning them against the dangers of using illegal cannabis compared to high-quality, safe products supplied on the legal market. 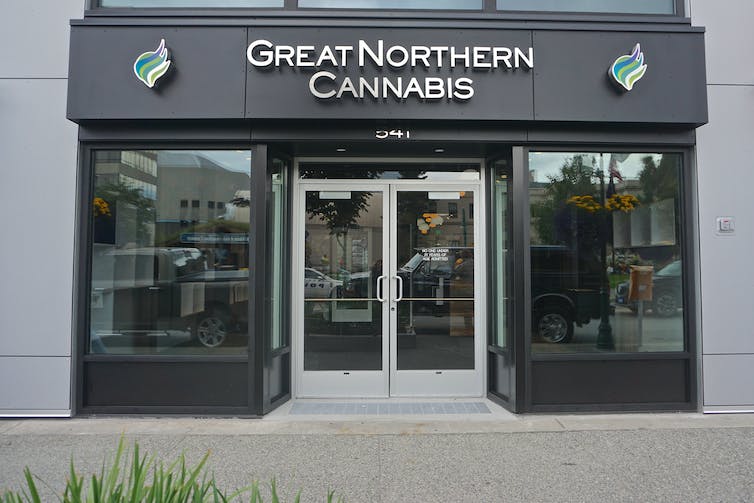 A legal cannabis store in the US. Linda Harms/Shutterstock.com

It’s also important to introduce incentives for illegal cannabis producers and sellers to turn their activity toward the legal sector. So as well as investment in law enforcement to crack down on criminal activity, it’s important that former cannabis dealers are given viable job alternatives. Otherwise they may just switch to selling alternative illegal drugs or close substitutes.

Dealers often live in deprived neighbourhoods and are trapped in vicious cycles of crime where low aspirations and job prospects push them into illegal businesses. Investment in these communities is therefore needed to support and train those that make a living from drug dealing.

Read more: Not all drug dealers are the same – it’s time to ditch outdated stereotypes

The money that will be generated by selling and taxing legal cannabis should be largely redistributed towards these kinds of initiatives. Plus, legalising cannabis may enable the police to reallocate their efforts towards other crimes, improving police effectiveness against class-A drugs and non-drug crimes. This was found in the London borough of Lambeth after penalties were reduced in 2001 for those holding small amounts of cannabis.

History also shows that prohibition increases violent crimes. Famous gangsters such as Al Capone in Chicago in the 1920s profited from the imbalance between demand and supply of alcohol by establishing organised crime to supply and serve alcohol illegally in speakeasies. In illegal markets, violence is often seen as the only way to resolve conflicts and secure market power.

Our research was inspired by recent examples of cannabis legalisation in Canada and Uruguay. The stated objectives in both countries was to combat drug-related crime. It is too early to evaluate the overall effects of these policies but evidence from Canada suggests that illegal transactions linked to the black market shrunk as a result of legalisation. And we also learnt from what did not work so well there: a shortage of legal supply helped the illegal market persist. So it’s important to avoid making the same mistakes and propose more effective policies to control the overall consumption of cannabis.