You might think that cannabis and the church have nothing to do with each other, and in most cases you would be right. However, a group of people from Denver, Colorado, beg to differ.

Inaugurated on 4/20/2017, the International Church of Cannabis is in no way a regular church. Its religion, Elevationism, does not have a specific dogma nor does it require any kind of conversion. Its goal is to educate on the spiritual benefits of cannabis and provide a space to enjoy them responsibly. The only thing it asks of its followers is that they recognize cannabis as a sacred flower, capable of deepening their spiritual journey of self-knowledge.

To reveal the best version of each person and creatively feed the community. 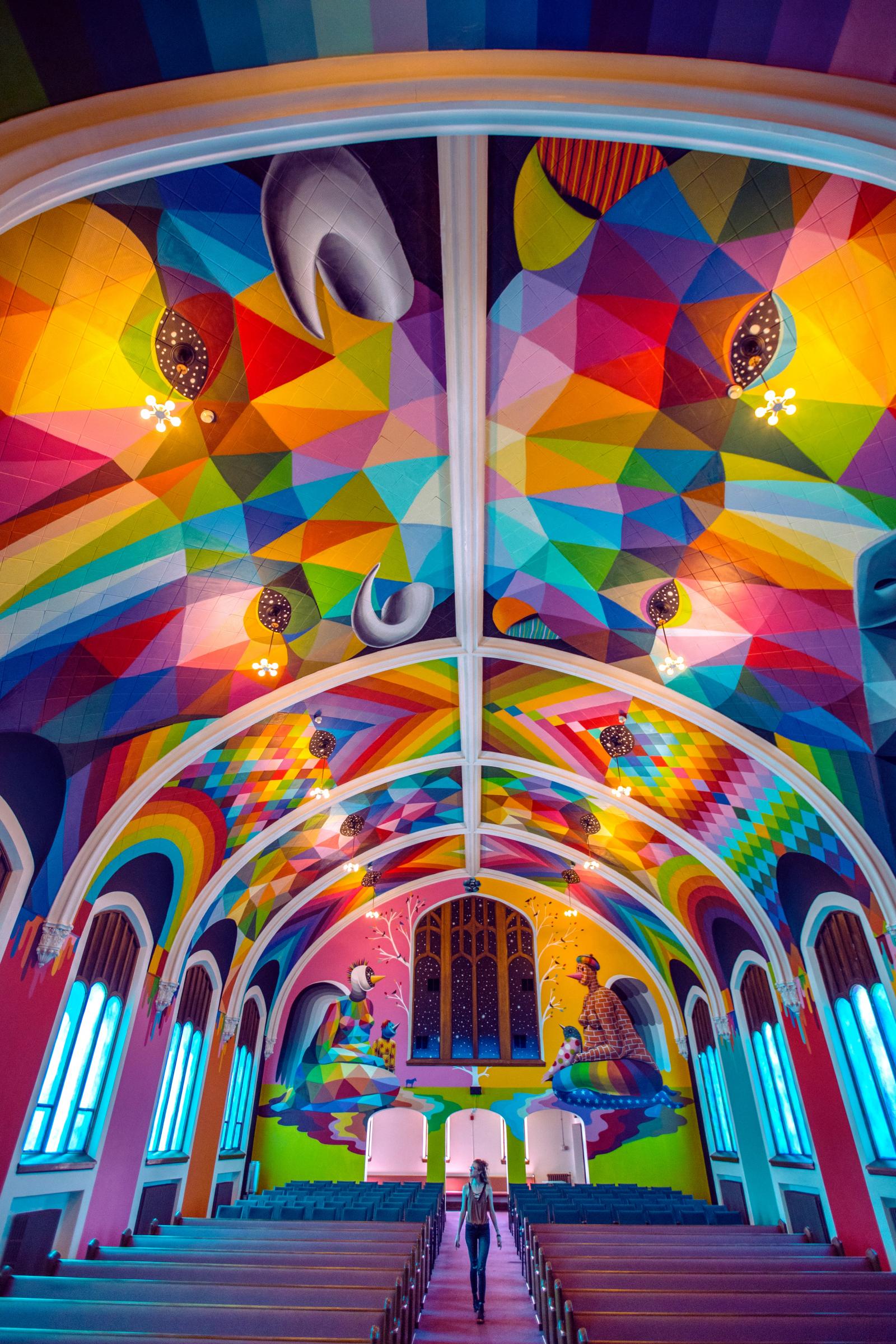 The building itself is impressive. It preserves the same facade of the Lutheran church that existed there at the beginning of the 20th century, decorated today with murals that resemble graffiti, made by the American artist Kenny Scharf. Inside, things are very different: Spanish painter Okuda San Miguel embellished the entire interior of the church with his renowned style of geometric and colorful shapes. The process took him six days and he didn’t even use sketches to do it. On the seventh day, he rested.

The project began to take shape in 2015, when former tennis player Steve Berke convinced his parents to buy the old church and turn it into an apartment building.

That same year, Berke had founded Bang Digital Media, a company dedicated to advertising and marketing for cannabis companies. Luckily, he and his friends and co-founders (Lee Molloy, Adam Mutchler, Briley Hale, and Angie Hargot) decided to keep the building and transform it into the startup it is today.

The ritual use of cannabis is nothing new. Religions such as Hinduism and Rastafarianism have practiced it long before the elevationists, who are not alone today either. Similar initiatives have popped up in other states (such as Michigan, California, Florida and Indianapolis), but only here members can freely consume marijuana inside the building, claiming their constitutional freedom of religion. Of course, said members must be over 21 and registered as followers of the Elevationist faith. There are around 7,500 already, although fewer than 100 visit the church regularly.

Cannabis use is legal in the state of Colorado, but not in public spaces, which is why only its members can consume it, and never when the church is open to the general public. It is also not legal to buy or sell marijuana in the building. Still, church founders are confident that they will eventually be able to allow public consumption, as there are more and more movements to change cannabis regulation laws rising up every day.

Although the organization is non-profit, it supports itself financially through various fundraising methods such as donations, space rental for events, and even a gift shop where you can buy products with themes related to the church and the artists that helped shape it.

Other church activities include charitable efforts to feed and give clothes to the city’s homeless people, cleaning the streets, and raising funds for other organizations.

Some months ago, the church launched BEYOND, an immersive experience involving projections, laser lights, and rock music. It begins with a nine-minute guided meditation and continues with a twenty-five minute psychedelic light show, accompanied by classic rock tunes.

In the near future, the elevationists hope to be able to take greater advantage of the place’s potential by offering talks, industry events, workshops and even cannabis-themed weddings for both their members and the general public.