One of the benefits of the rapidly increasing number of regulated cannabis programs in the U.S., both medical and Adult Use, is the growing knowledge base we are developing of cannabinoids.

THC remains the most sought-after and prevalent cannabinoid in cannabis, followed by CBD. The 2018 Farm Bill made CBD legal(ish), and it’s now found in virtually every product imaginable, promising relief from a long list of ailments and conditions. 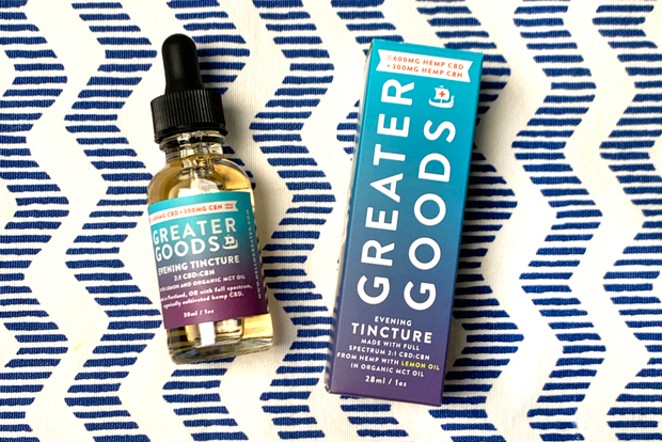 Yet there are numerous, lesser-known cannabinoids of which we have an expanding understanding of their sought-after effects. One such cannabinoid is CBN, found in great amounts of any cannabis plant, and is, rather, an effect of oxidation. By exposing THC to light and heat—such as a poorly sealed jar of cannabis sitting in a sunny window—the THC degrades into CBN.

Older cannabis sees this happen, as well. Ever smoked a months-old (or years-old) joint found in the back of a drawer or stash box? The heavy, thick and nap-inducing effects it provides is believed to be due in part to the CBN.

That effect caught the imagination and interest of Carrie Solomon and Jody Ake, the married team behind Greater Goods. Known to many Oregonians for their initial brand, Leif Goods, maker of THC-infused artisan chocolate edibles and pain-relieving topicals, Greater Goods was launched with the stated mission to „make gloriously awesome, full spectrum hemp CBD confections and tinctures to help you rebel against the negative.”

That „negative” for many manifests as poor sleep, which has been an increasing complaint during Year One of the pandemic. Some 70 million Americans have what is deemed a „sleep disorder,” and the detrimental resulting effects of not sleeping well are both physical and psychological. Last year, Americans spent nearly $430 million for over-the-counter sleep aids, a jump from $406 million in 2019.

Greater Goods entered this market with its „CBN Evening Tincture,” described as a „2:1 ratio of ~600mg CBD to ~300mg CBN, crafted with full-spectrum hemp CBD (with trace amounts of THC) to provide a whole plant, entourage approach to wellbeing.”

Made using organic non-GMO MCT oil, it’s taken beneath the tongue, or mixed into a beverage, with a light citrus taste, and the processing doesn’t leave a „weed” aftertaste. Being that it’s within the limits of THC content for CBD products, it can be shipped nationwide.

I’ve smoked mine (and several other people’s) share of older cannabis, and can confirm first-hand that THC and CBN together provide a synergetic effect which magically transforms me into a snoring pile of uselessness. So would the dynamic duo of CBD and CBN provide a sleep-friendly effect, minus the „intoxication” of THC, provided dose amounts are adjacent to the recommended serving size?

Testing this theory was done by a handful of friends who shared similar complaints regarding getting to/staying asleep, all of whom are women. I added myself to the test group, even though I’m a poor study candidate, having zero issues falling asleep quickly and at length—plus I come to any study unapologetically high in THC content. Users tried the tincture as directed for several nights that they had sleep issues.

Feedback was unanimously positive, with all users reporting a beneficial night of rest with no sense of feeling high/intoxicated during the night, or groggy/hung over the following morning. However, there was an unexpected, yet not wholly undesirable effect experienced by all: intense dreaming. Not nightmares, and nothing bad, but there was a noticeably stronger involvement in, and memory of, the dreams. I experienced it several times over a five-day period of using the tincture, but thought mine was a unique experience.

Not so much. A user reported back:

„I felt like I got a deep sleep when I used it, & very vivid & weird dreams which were fun.  I used to have amazingly strange dreams then a few years ago this stopped. Probably around the time of our move & all the extreme unrelenting stress which affected my sleep so much & for too long.”

Highly recommended for those with sleeping (and dreaming) issues.

Check it out at hellogreater.com.